Please ensure Javascript is enabled for purposes of website accessibility
Log In Help Join The Motley Fool
Free Article Join Over 1 Million Premium Members And Get More In-Depth Stock Guidance and Research
By Eric Volkman – Feb 26, 2016 at 10:02AM

For this week's installment, we have a pair of dividend aristocrats, plus a REIT that operates in a popular niche.

Income investors will find it tough to say goodbye to February, as the month was one of the most active for dividend raises in quite some time. It feels like we're winding down now; there were comparatively fewer hikes last week than in the initial weeks of the month.

Still, there was plenty of distribution boosting going on. As with our previous installment, there were too many increases to choose from last week. Here's how I narrowed the list down to the usual trio:

Coca-Cola
One of the most noble of the Dividend Aristocrats -- the exclusive group of stocks that has raised its payout at least once annually for a minimum of 25 years running -- Coca-Cola (KO -1.11%) is at it again. The company increased its quarterly dividend by 6%, to $0.35 per share. 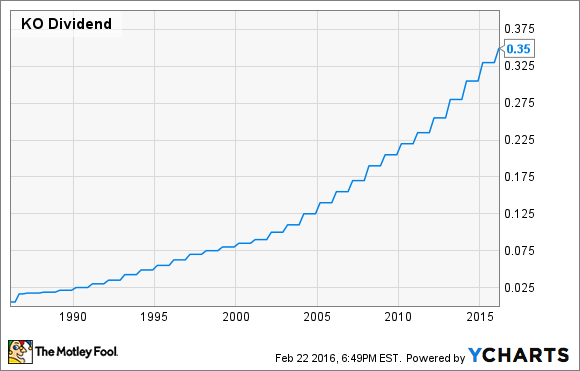 This follows the release of Q4 2015 results, where revenue fell by 8% on a year-over-year basis to $10 billion, mostly because of a strengthened U.S. dollar. Net profit ballooned by 61% to $1.2 billion, although this was chiefly due to a Q4 2014 that featured a big loss in the "other income" line item. Both top and bottom lines slightly beat expectations.

Although the revenue dip was a bit disheartening, the company did have numerous bright spots in its Q4 announcement that indicate it'll do better going forward. Meanwhile, cash flow is as robust as it's ever been, and there's plenty of scratch for a payout. There's no need to worry about the viability of this dividend.

Coca-Cola's new distribution will be handed out on April 1 to stockholders of record as of March 15. At the current stock price, it yields 3.2%, putting it a full percentage point in front of the 2.2% average of the stocks on the S&P 500 index.

Sherwin Williams (SHW 1.52%)
Another Dividend Aristocrat is Sherwin-Williams (SHW 1.52%), a well-known name in the home-improvement sphere. The company is emphatically maintaining its status with a big 25% raise in its quarterly payout, to $0.84 per share.

The increase is meaty but not at all unexpected. Thanks in no small part to a lively housing market, the company had a strong finish to its fiscal 2015. Q4 net profit was almost 50% higher on a year-over-year basis, at $198 million.

Although revenue only crept up by 1%, it was good enough to notch an all-time high quarterly record for the company. Both metrics beat expectations, the bottom line especially so. 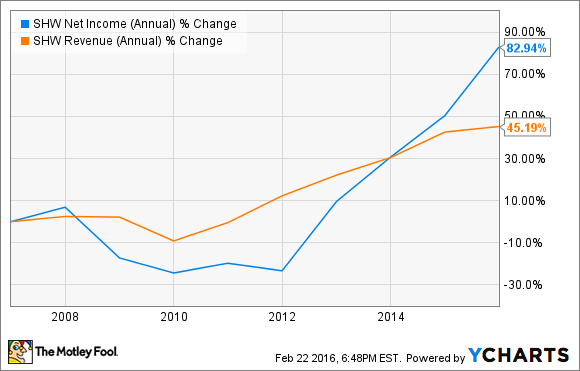 Not all was sunshine and roses, though; Sherwin-Williams proffered guidance for fiscal 2016 that was lower than many had been expecting. The company is projecting low-single-digit percentage growth in sales for the current quarter, while annual profitability looks set to improve by 9% to 11% -- somewhat shy of analyst expectations.

But as far as the dividend is concerned, investors shouldn't fret -- after all, growth is still on tap for both the top and bottom lines. Meanwhile, there's plenty of free cash with which to fund the distribution, even at the well-enhanced new rate.

Sherwin-Williams' next dividend will be paid on March 11 to shareholders of record as of Feb. 29. It yields 1.3%.

Digital Realty Trust
Data centers are not the most exciting of assets, but they can make plenty of dosh. Exhibit A, Digital Realty Trust (DLR -3.79%) a real estate investment trust that specializes in these facilities. The company has hiked its quarterly dividend by 4% to $0.88 per share.

As a REIT, Digital Realty Trust is obligated to hand out the bulk of its profits in the form of a dividend. Since the company's IPO in late 2004, this payout has risen from just over $0.15 per share to the present level.

Digital Realty Trust is a consistent performer that continues to do well. In its most recently reported quarter, funds from operations (a key profitability metric for REITs) was $178 million, or 5% higher on a year-over-year basis. Meanwhile, revenue improved by 6% to $436 million. 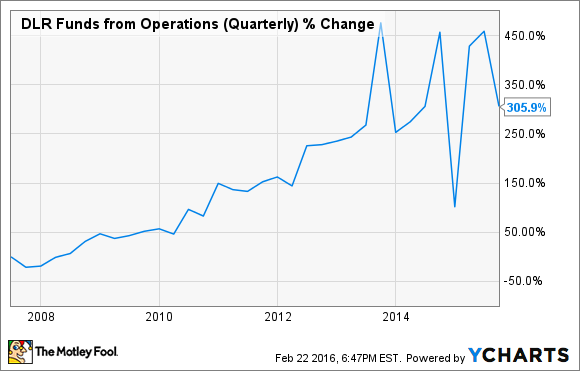 We can expect continued growth. Organically, the REIT should do better because demand for space in data centers is strong, and will only rise as the world becomes more digital. Also adding heft to its results will be Telx, a peer company it bought for nearly $2 billion in a deal that closed late last year. I think this dividend is safe, and will remain so well into the future.

Digital Realty Trust's upcoming distribution will be paid on March 31 to shareholders of record as of March 15. At the current share price, it yields 4.3%.

Eric Volkman has no position in any stocks mentioned. The Motley Fool recommends Coca-Cola and Sherwin-Williams. Try any of our Foolish newsletter services free for 30 days. We Fools may not all hold the same opinions, but we all believe that considering a diverse range of insights makes us better investors. The Motley Fool has a disclosure policy.