Please ensure Javascript is enabled for purposes of website accessibility
Log In Help Join The Motley Fool
Free Article Join Over 1 Million Premium Members And Get More In-Depth Stock Guidance and Research
By Adam Levine-Weinberg - Feb 26, 2016 at 10:40AM

United Continental is looking to join American Airlines by buying back more than 10% of its outstanding shares this year.

As the least profitable of the three largest U.S. airlines, United Continental (UAL -0.30%) has been relatively cautious about returning cash to shareholders. For example, unlike its peers Delta Air Lines and American Airlines (AAL 0.72%), United currently doesn't pay a dividend.

United has returned less cash to shareholders than its peers up until now. Image source: The Motley Fool.

However, United has been repurchasing some stock since mid-2014. While it hasn't been nearly as aggressive with its share buybacks as American Airlines in the past year and a half, United Continental is finally ramping up its share repurchase activity this quarter.

United starts returning cash
United Continental launched its first share buyback program in July 2014, after earning a $919 million Q2 profit. The company intended to buy back $1 billion of stock over the course of three years. At the time, it seemed prudent to start with a relatively small repurchase program, given that United was just one quarter removed from posting an ugly $489 million loss in Q1 2014.

However, July 2014 was also when oil prices began to fall rapidly. The price of Brent crude plummeted from around $110/barrel at the beginning of July 2014 to less than $50/barrel by January 2015, and has more recently fallen to roughly $30/barrel. 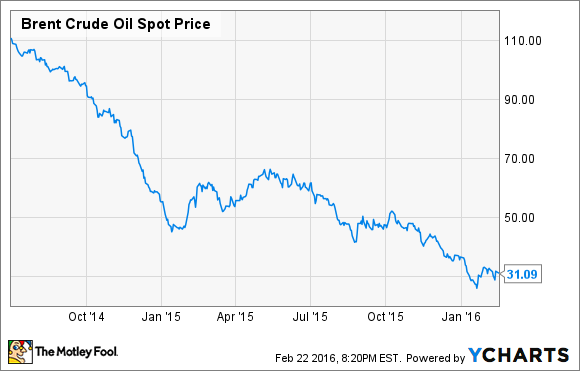 This caused profitability to soar. In fact, United Continental's pre-tax earnings nearly doubled in 2014 and more than doubled in 2015, growing from $1.0 billion to $4.5 billion during that time span.

United completed the original buyback shortly thereafter, and by the end of 2015, it had also spent $552 million toward the new $3 billion share repurchase authorization.

Time for even more buybacks
In total, United Continental spent $1.2 billion on share buybacks during 2015, repurchasing 21 million shares, or a little more than 5% of its outstanding stock.

That pales in comparison to American Airlines' buyback activity. During 2015, American Airlines (which is roughly the same size as United) spent $3.6 billion on share buybacks, repurchasing 85.1 million shares, or roughly 12% of its outstanding stock.

American Airlines CEO Doug Parker has reasoned that with airline profits at an all-time high and interest rates near record lows, it makes sense to borrow money for airplane purchases while using much of the company's cash flow for buybacks.

This led CFO Gerry Laderman to predict during United's Q4 earnings call last month that the company would buy back $750 million of stock in the first quarter alone. Last week, United went further, stating in a regulatory filing that it now plans to repurchase $1.5 billion of stock during Q1 and complete the entire $3 billion buyback by the second half of 2016.

While United stock has been very volatile in the past year -- and even more so since the recent buyback announcement -- at current prices, United would repurchase more than 7% of its shares in Q1 alone and at least 12% of its shares this year.

This will provide a meaningful lift to earnings per share. With United Continental's underlying pre-tax profit also likely to grow (albeit modestly) in 2016, rising buyback activity should create substantial value for long-term investors.