A complete restructuring may be Chesapeake's only option.

By nearly every metric, Chesapeake Energy (NYSE: CHK) is on its deathbed.

In the past 3 months, shares are down nearly 60%. Over the past four quarters, the company has generated negative-$4.40 in free cash flow per share. It's suspended both common and preferred stock dividends in a move to preserve cash. And to put a cherry on top. This month, it announced that Kirkland & Ellis LLP, whose legal team was named 2015's Bankruptcy Team of the Year, is helping "advise the company." Management said that it "has no plans to pursue bankruptcy," but the market is taking that with a grain of salt.

Only a rebound in natural gas prices can save the company. But right now, there's only one question that matters: How long can Chesapeake Energy survive?

Restructuring its debt is a must
Chesapeake's net debt stands at $9.5 billion, versus a market cap of just $1.3 billion. In March, the company will need to come up with $500 million to retire its first round of debt maturities. It also has commitments to pay about $2 billion a year for space on pipelines run by several companies.

It's safe to say that Chesapeake is in the definition of a cash crunch. As it stands today, the company can simply not survive in its current state. Free cash flow per share has been negative since 2006, and net debt-to-EBITDA levels are starting to skyrocket. Competitor Linn Energy (NASDAQ: LINE) has been scrambling to get its biggest debt holders to accept looser terms or perhaps a debt-to-equity swap. Chesapeake probably realizes that this is one of its only options as well.

Current liquidity only goes so far
Chesapeake bulls underpin their belief that the company can withstand the current downturn by highlighting its strong liquidity position. As of last quarter, the company had $4.3 billion in cash and undrawn credit facilities. This seems comforting until you compare it with Chesapeake's $3.2 billion in cash burn in 2015. When the company releases its fourth-quarter earnings on Feb. 23, expect to see the situation worsen even further.

Achieving additional cost savings this year may not be feasible. Dividends have already been suspended, and capital expenditures have been slashed nearly as far as possible. Chesapeake has nearly gutted its entire capital expenditure budget, virtually eliminating the easiest way to improve cash flows. 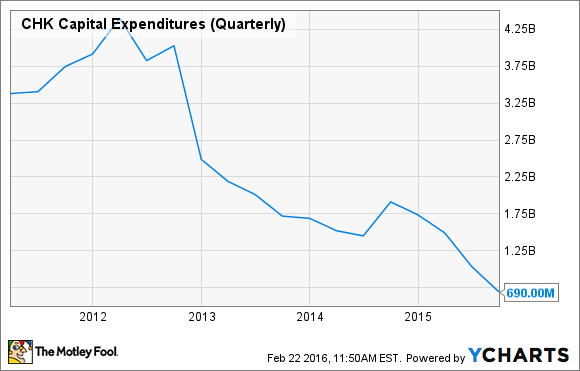 Can Chesapeake survive?
If you put the pieces together, it's tough to see Chesapeake surviving in its current state. Almost none of its properties are making money, and its liquidity position should erode in a matter of quarters. If you expect the company to generate some cash through asset sales, think again. Suitors would probably fetch a much more attractive deal once the assets enter liquidation. There's no hurry, either, as the buyer would be taking on money-losing projects anyway.

At this point, a major restructuring looks to be Chesapeake's only option. With $9.5 billion in net debt, it's possible equity holders are wiped out entirely unless natural gas prices rebound strongly over the next few months.