Please ensure Javascript is enabled for purposes of website accessibility
Log In Help Join The Motley Fool
Free Article Join Over 1 Million Premium Members And Get More In-Depth Stock Guidance and Research
By Matthew DiLallo - Feb 27, 2016 at 8:00AM

On the surface, it would appear that Energy Transfer Partners (NYSE: ETP) delivered solid fourth-quarter results after the closing bell on Wednesday. However, beneath the surface the results weren't quite so strong and actually only appeared that way because of one item buried away in an accounting reconciliation. That one change made all the difference.

Drilling down into the numbers
Energy Transfer Partners reported distributable cash flow of $956 million, which was up $165 million from the year-ago quarter. That resulted in a solid distribution coverage ratio of 1.07, pushing up the company's full-year coverage ratio to 0.99, implying that it paid out just slightly more than it made last year. Still, a solid result overall, especially considering the brutal energy market conditions it had to operate in. 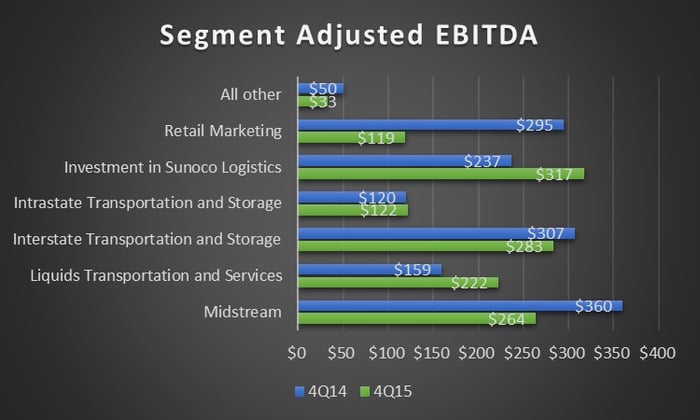 The biggest weakness was in the company's Retail Marketing segment, which dropped in part because it deconsolidated Sunoco LP (SUN) after selling Sunoco LP's general partner to its own general partner, Energy Transfer Equity (ET). Further, many of the company's retail marketing assets were sold to Sunoco during the year, with what was remaining also being sold to Sunoco in a deal that's expected to close next month, effective as of the first of the year. So that segment's results will have less of an impact going forward.

In addition, the company continued to experience weakness in its midstream segment. While volumes transported continued to be strong thanks to the King Ranch acquisition and increased gathering and processing capacity in several regions, lower natural gas and NGL prices continue to crimp margins.

This weakness was only partially offset by stronger earnings from its investment in Sunoco Logistics Partners (NYSE: SXL), which benefited from new projects going into service. In particular, Sunoco Logistics benefited from the commission of the Permian Express 2 pipeline and the Allegheny Access pipeline. In addition, Energy Transfer Partners enjoyed stronger segment earnings from its Liquids Transportation and Services segment, which was primarily driven by higher volumes, in part because of the commissioning of a crude oil pipeline.

Overall, however, earnings on a segment level were weaker, which is what drove adjusted EBITDA down from $1.53 billion in the year-ago quarter to just $1.36 billion in the fourth quarter. That would suggest weaker distributable cash flow, but that wasn't the case. Here's why.

Zeroing in on the difference maker
To understand why distributable cash flow grew even as its underlying earnings slumped, we need to take a closer look at how Energy Transfer Equity reconciles the two. Following is a screen shot of this reconciliation, with the key change highlighted in blue: 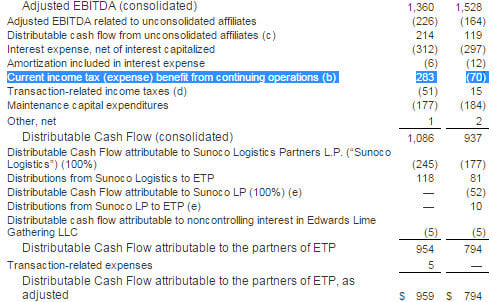 Because of a number of factors, including lower earnings, the retroactive re-enactment of bonus depreciation, and a current income tax benefit relating to the funding of Sunoco's pension plan obligations, Energy Transfer Partners went from a $70 million tax expense to a $283 million income tax benefit. That shift was the primary reason distributable cash flow went up and not down.

This isn't to say that Energy Transfer Equity did anything out of the ordinary to boost distributable cash flow. Instead, I'm pointing this out to draw your attention to the fact that its underlying earnings weren't as strong as the headline distributable cash flow numbers would seem to indicate. It's a caution flag that investors really need to keep an eye on in future quarters.

Investor takeaway
While Energy Transfer Partners' bottom-line numbers were solid, there were some cracks below the surface. The most concerning one is the midstream segment, which continues to feel the pinch from weakening commodity prices. That's something investors need to keep an eye on, because it could cause problems in future quarters if that segment's earnings continue to slip.