Please ensure Javascript is enabled for purposes of website accessibility
Log In Help Join The Motley Fool
Free Article Join Over 1 Million Premium Members And Get More In-Depth Stock Guidance and Research
By John Bromels - Feb 27, 2016 at 9:45AM

Reports from Google and Apple look good -- for competitors GM and Ford. But a new report on car ownership is the icing on the cake.

General Motors (NYSE: GM) and Ford (NYSE: F) often fade into the background in discussions about the future of cars. Younger, hotter companies such as Alphabet's (NASDAQ: GOOG) (NASDAQ: GOOGL) Google and Apple (NASDAQ: AAPL) tend to hog the limelight.

But behind the scenes, GM and Ford are positioning themselves at the forefront of emerging vehicle technology. And three new reports indicate they aren't out of the game yet.

Report No. 1: Google's self-driving car testing report on disengagements of autonomous mode
In January, Google released a report covering the 14 months between September 2014 and November 2015. It contained data on every incident in which a human driver had to take control of one of Google's autonomous vehicles and why. And unfortunately, incidents in which the human drivers take control for safety reasons have been growing more frequent: 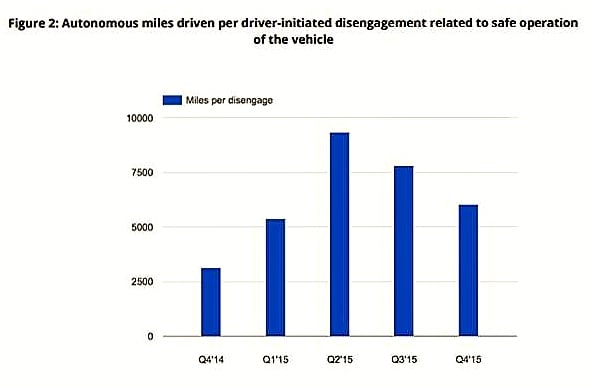 Overall, the report looks good for Google's automotive competitors, as it shows that even with its head start on development of driverless technology, said technology isn't ready for prime time and probably won't be for the foreseeable future.

Report No. 2: AppleInsider's Project Titan update
Quoting a "previously reliable source with knowledge of the team's activities," AppleInsider reported that Apple has put a hiring freeze on its automotive Project Titan team of about 1,000 employees. This report follows on the heels of a Wall Street Journal article revealing that the head of Project Titan, Steve Zadesky, is leaving the company. The project may be in serious trouble.

Again, this is good news for GM and Ford, because of Apple's history of developing disruptive technology coupled with the image and prestige of the company's products. Apple also had an aggressive timeline in place for a Project Titan product delivery, by 2019. The last thing GM and Ford (or, for that matter, Google) want is for Apple to beat them to market with a competing, disruptive product.

But it's not just happening among millennials. Since 2008, the percentage of driver license holders decreased in every age group except people age 70 and up -- not a desirable demographic shift for automakers. GM and Ford have already recognized this trend, making smart investments in ride-sharing and car-sharing technology. GM took a stake in ride-sharing company Lyft and launched its own Maven car-sharing platform. Ford has been developing a combined car-sharing/ride-sharing platform called FordPass.

These investments should help Ford and GM stay relevant as the marketplace changes. According to Navigant Research, global car sharing services revenue is expected to grow from $1.1 billion in 2015 to $6.5 billion in 2024.[http://www.navigantresearch.com/research/carsharing-programs]

The Foolish bottom line
Nobody knows what technologies will come to dominate the automotive landscape in 10, let alone 30, years, and that's a big risk for car companies. But GM and Ford are making the right investments at the right time to reduce those risks as new advancements continue to emerge.

The best news from these reports is that Apple and Google -- the two tech companies likeliest to be serious competitors in the U.S. driverless car market -- are clearly still far from developing a commercially viable product. In the short term, that means less competition for GM and Ford's vehicles. In the long term, it gives GM's and Ford's own investments in driverless technology time to bear fruit.

Ford's and GM's investments in ride and car sharing should pay off, too, as overall car ownership declines. Their willingness to enter the driverless "arms race" will pay dividends even further down the road as autonomous vehicles begin to become mainstream.

In the short term, these reports don't reveal anything that will necessarily improve the bottom lines of GM or Ford. For that matter, they also don't reveal anything particularly damaging to Apple or Google. But in light of these reports, GM and Ford look like good bets for long-term investors. Both stocks have taken a beating thus far in 2016, so this may be a good opportunity to buy in.