Please ensure Javascript is enabled for purposes of website accessibility
Log In Help Join The Motley Fool
Free Article Join Over 1 Million Premium Members And Get More In-Depth Stock Guidance and Research
By Adam Levine-Weinberg – Feb 28, 2016 at 10:15AM

Too many investors are overly focused on airlines' unit revenue trends rather than their profit growth.

The behavior of airline stocks over the past year has been puzzling for investors. Airline profits have soared to record highs thanks to low fuel prices. However, most airline stocks have struggled, as investors have become worried about unit revenue declines.

Many airline stocks have fallen in the past year despite strong profit growth. Photo: Spirit Airlines.

This reaction neglects the significant interplay between fuel prices and fares. When fuel prices decline, it encourages airlines to grow faster by adding flights that might not be profitable with higher fuel prices. Yet if fuel prices were to rebound in the next few years, airlines could bolster their unit revenue (and profitability) by cutting these same flights.

Spirit plummets; Volaris rises
Spirit Airlines was one of the worst-performing airline stocks of 2015. Shares of the largest U.S. ULCC have lost 40% of their value in the past year. By contrast, shares of Mexican ULCC Volaris have more than doubled in the past year, leading the industry. 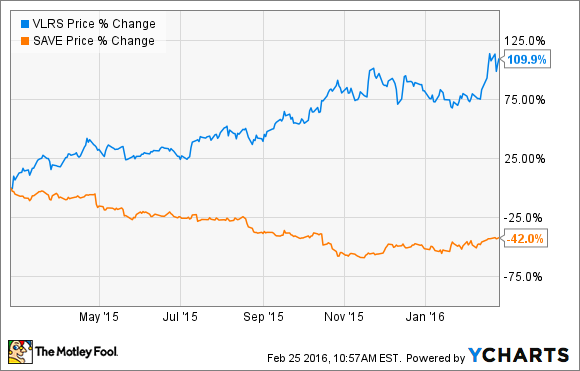 The two airlines share very similar business models, built around minimizing unit costs, filling planes with low base fares, and making money on a variety of fees for optional add-ons.

To some extent, the vast divergence in stock performance between Spirit and Volaris last year was just correcting big moves in the opposite direction during 2014. That said, as of Thursday, Volaris shares traded for 13.6 times trailing operating income: a substantial premium to Spirit Airlines at 6.7 times trailing operating income. Clearly, investors are a lot more positive about Volaris than Spirit Airlines right now.

What unit revenue gains?
The ironic thing is that from the prospective of a U.S.-based investor, Volaris hasn't actually been growing unit revenue lately. As a Mexico-based company, Volaris reports its results in pesos, but the Mexican peso has declined drastically against the dollar in the past year and a half.

The weak peso means that Mexican airlines haven't faced the same amount of (local currency) pricing pressure as U.S. airlines. Fuel costs haven't fallen as much when measured in pesos, while other dollar-denominated expenses such as aircraft rent and maintenance costs have increased sharply.

Thus, measured in dollars, Volaris' unit revenue is falling. Nevertheless, Spirit and Volaris have both posted profit growth by reducing their dollar-denominated costs, helped by lower fuel prices. The biggest difference between the two is that Volaris' profit growth is showing up on the unit revenue line in its financial statements because of the weak peso.

Use the irrationality to your advantage
There's no rational reason for the massive divergence between Spirit Airlines' and Volaris' stock performance: It's all driven by perception. Volaris seems to be doing better from a revenue perspective, so its stock is outperforming.

The key takeaway is that many of the airlines that have reported big unit revenue declines -- not just Spirit Airlines -- are irrationally undervalued right now. Patient investors should consider buying these stocks while they're extremely cheap and waiting for Mr. Market to come to his senses.