One company is sitting on several multibillion-dollar franchises, and it's trading near lows investors haven't seen in a while.

Despite their age, Minnie and Mickey are as popular today as they've ever been. Image source: Disney.

Walt Disney (DIS -1.80%) stock has let me down recently. Nevertheless, I'd buy more -- right now -- if the company weren't already responsible for 28% of our family portfolio.

Actually, check that. I may still buy more, if I find good reasons to sell other holdings and raise funds to add to our position in Disney stock and options.

Improving business, declining stock = rich opportunity
Why am I so bullish? Have a look at the chart: 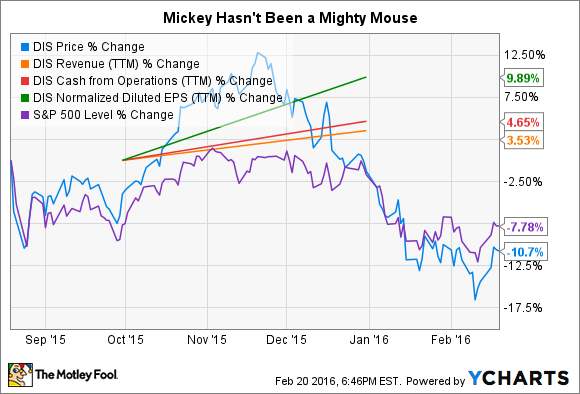 Revenue, profit, and cash from operations have all improved nicely even as Disney stock has underperformed the market by about 3 percentage points since I made a rather substantial investment on January 2017 call options known as Long-Term Equity Anticipation Securities (LEAPS). Here's what I said about that bet in September:

To invest in LEAPs, I also need better-than-average odds of catalysts materializing before expiration. In this case, we have a potential record setter in Star Wars: The Force Awakens in December, followed by Captain America: Civil War in May of next year. Disney films could be responsible for $4 billion in global box-office receipts in fiscal 2016. Mix in the stock action, and I suspect there's a good chance Disney gets to $126 a share sometime during the next 12 months, the price at which my bet becomes a double. The stock already topped $121 in early August ...

My opinion hasn't changed, even as the losses have piled up. Here are my three reasons for holding fast: