Is this market leader the leading choice for investing in building automation? Maybe not.

Although Johnson Controls (JCI 0.97%) has most recently gained infamy as a villain fleeing the U.S. in a corporate inversion with Tyco International, the company remains an industry leader in using the Internet of Things to provide building automation systems (BAS). Though it's a top dog in the field, there are plenty of peers nipping at its heels. Let's take a look at three of these competitors to see how worried the back of Johnson Controls' feet should be.

The roundup
With its hands in numerous industries -- everything from oil and gas to aerospace to vacuum bags -- Honeywell International (HON -0.09%) directly competes with Johnson Controls and its Metasys system in the building automation field by way of its Enterprise Buildings Integrator -- a comprehensive software suite of building management solutions, which addresses HVAC, fire protection, security, and energy efficiency. The company is a formidable competitor. In keeping pace with Johnson Controls, which is fortifying its Metasys solution by merging with Tyco, Honeywell recently announced its intent to acquire privately held Xtralis, a leader in fire detection and security solutions, for $480 million. 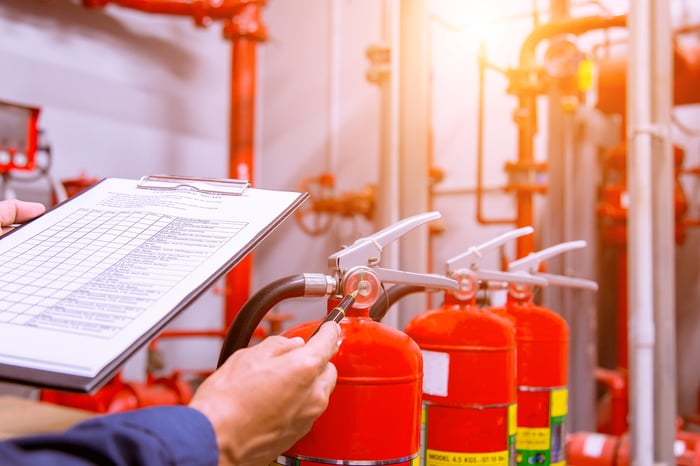 From smoke detectors to jet engines, United Technologies (RTX 0.25%), like Honeywell, is an industrials giant dealing in a wide variety of businesses. The company operates several industry-leading HVAC, fire security, and safety solutions brands through which it competes with Johnson Controls -- with brands such as Carrier, Kidde, and Chubbs.

And in terms of building automation, United Technologies' provides the WebCTRL system. Like Metasys, WebCTRL can be used in numerous settings. Starwood's W Hotel in Times Square, for example, employed the system in 2015 to achieve an 18.9% reduction in energy use compared with 2014; Princeton University used WebCTRL in one of its research center buildings to reduce energy usage by 33%.

The measure up
With market caps hovering around $80 billion, Honeywell and United Technologies far outweigh that of Johnson Controls' approximate $23 billion. These two companies might attract conservative investors since they aren't as tightly levered to success with building automation, though their exposure is still substantial enough that success would have a material impact. For the $56.5 billion in net sales that United Technologies reported in 2015, its climate, controls, and security segment (CCS) contributed $16.7 billion; Honeywell's automation and control solutions (ACS) segment contributed $14.1 billion to the company's $38.6 billion in revenue for the same period.

Conservative investors may also be drawn to Honeywell and United Technologies' higher margins -- margins that exist despite the possible inferior performance of building automation segments. For example, of Honeywell's three operating segments, ACS had the lowest segment margin -- 16.4% -- in 2015; nonetheless, the other two segments buoyed the overall segment margin to 18.8%. United Technologies, on the other hand, reported adjusted segment operating profit margin of 17.5% for its climate, controls, and security segment in 2015; this was the second best of four operating segments and helped to bring the company's adjusted segment operating profit margin up to 16.7% for the year. Lastly, conservative investors may also appreciate Honeywell and United Technologies' superior ability -- lasting more than five years -- to churn profits out of shareholders' money; each company has a return on equity over 25% -- Johnson Controls equals just over 14%.

Smaller than Johnson Controls, with a market cap under $14 billion, Ingersoll-Rand may pique the interest of investors looking for a more direct approach to the BAS market. Whereas Honeywell's ACS segment contributed 36.5% to the company's revenue in 2015, and United Technologies' CCS segment contributed 29.6%, Ingersoll-Rand's climate segment accounted for 77% during 2015. 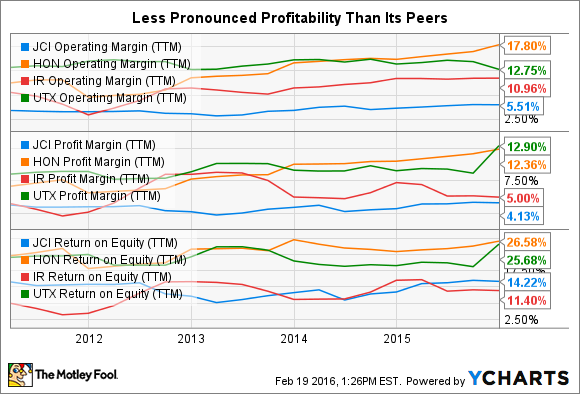 Booking $923 million in segment income from net sales of $1.05 billion, Johnson Controls only reported a segment profit margin of 8.8% for its building efficiency segment in FY 2015. This fell between the margins of its two other segments: Automotive experience reported 5.9%, and power solutions reported 17.5%. Unlike Honeywell and United Technologies, Johnson Controls is more reliant on its BAS segment to maintain profitability -- something which may not be desirable for risk-averse investors.

The bottom line on the bottom line
Margins and return on equity are important metrics to consider when comparing peers, but it's all for naught if there's no look at the actual earnings. Here again, Johnson Controls lags its peers. 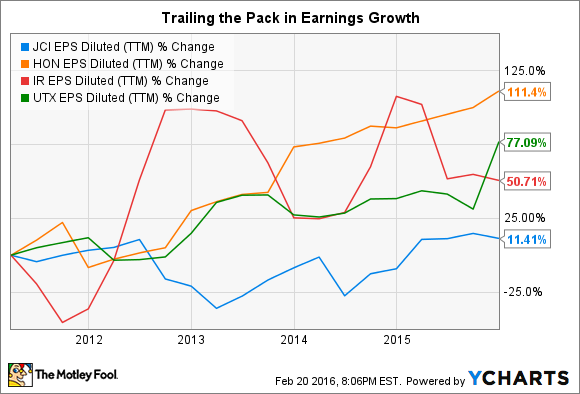 Honeywell, the clear winner, has excelled at growing profits over the past five years, while United Technologies and Ingersoll-Rand have also successfully grown earnings. That's not to say that Johnson Controls hasn't reported earnings growth -- it has -- but its peers have outpaced it by far, providing even more reason for conservative investors to shy away from it.

The takeaway
According to Navigant Research, there's substantial opportunity in the building automation market: Cumulative worldwide revenue for commercial BAS is expected to surpass $713 billion from 2015-2023. Surely, there will be plenty of winners, and Johnson Controls may be one of them. However, its peers certainly deserve close examination as well. Depending on one's stomach for risk, its competitors may, in fact, be the better options for investment.