Shares drop after the company released its fourth-quarter earnings.

What: After reporting its fourth-quarter and full-year financial results, shares of the clinical-stage vaccine company Novavax (NVAX 9.60%) dropped by as much as 10% in afternoon trading today.

So what: Novavax reported that it lost $78.8 million, or $0.29 per share, during the fourth quarter. That was much higher than the $31.5 million it lost in the year-ago period, and it was much worse than the $0.14 loss analysts were expecting. Revenue of $5.9 million for the quarter also came in a bit shy of the $8.07 million Wall Street was looking for.

Looking past the headline numbers, Novavax shared several key developments it achieved during the quarter, which included:

The larger-than-expected loss appears to be the primary reason shares fell today, though it's possible Novavax's stock is tanking simply because biotech stocks in general are having a rough day. The iShares Nasdaq Biotechnology ETF (IBB 1.67%), an ETF that holds a diverse set of stocks from the biotechnology sector, is also off by more than 2% in afternoon trading.

Now what: Biotechnology stocks are off to an an awful start to the year, as the IBB is down more than 24%, but Novavax's stock has faired even worse. Shares have currently lost more than 47% of their value in the last two months. 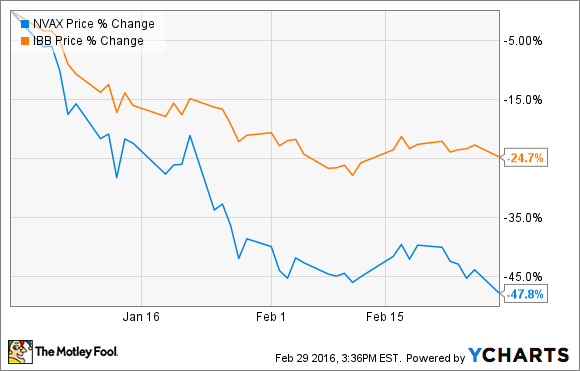 Regardless of this price action, the year ahead should be an exciting one for Novavax's investors. The company expects to reported top-line data from its Resolve trial in the third quarter of 2016, and it should also post data from its Phase 2 rollover trial in the second half the year. If the data looks good, it's likely the company's RSV vaccine could be in regulators' hands by 2017.

Given that the RSV virus afflicts tens of millions of patients around the world each year, Novavax's vaccine clearly holds blockbuster potential. Investors who are bullish on this company's prospects should likely ignore today's price drop and keep their eyes focused on the long term.