Despite a strong 2015, Enbridge Energy remains a high-risk dividend investment. Find out why 2016 is likely to be a very tough time for this pipeline giant.

Thanks to Wall Street's freak-out over the worst oil crash in 50 years, even midstream MLPs that reported solid growth in 2015 are getting hammered. Take, for instance, Enbridge Energy Partners (EEP), and its general partner, Enbridge (ENB -0.20%), which grew all its most important income metrics by double digits last year. 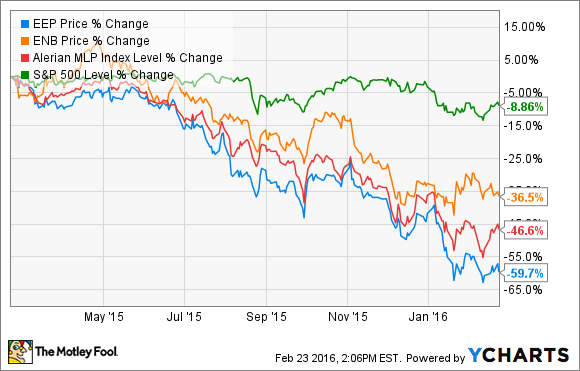 However, unlike other quality midstream operators such as Magellan Midstream Partners, Enterprise Products Partners, or Spectra Energy Partners, which the market's pessimism has irrationally placed on sale, Enbridge has earned its much lower valuation.

Let's take a closer look at Enbridge Energy's 2015 results to see just why it remains such a speculative and high-risk income investment.

Thanks to $2.6 billion worth of organic growth projects placed in service and dropdowns from its general partner, Enbridge Energy Partners managed to put up some impressive numbers in the middle of extremely challenging market conditions.

In fact, the MLP reported record liquid volumes of 2.88 million barrels per day and is guiding for further 10% to 15% volume growth in 2016. In addition, thanks to Enbridge Energy Partners' securing $1.9 billion in funding in 2015 and cutting 2016's capital spending budget to just $900 million, management believes it won't need to access equity markets this year.

However, despite this apparently rosy outlook, management also provided guidance that raises some troubling red flags and reveals why Enbridge remains such a high-risk energy investment.

Because of rising interest expenses, management expects DCF to decrease about 6% to $860 million in 2016. Not only does this mean that this year's coverage ratio is likely to weaken to an even more unsustainable 0.85, but it also means that to maintain the current payout, Enbridge Energy Partners will need to cover its DCF shortfall by tapping into some of that debt it raised last year.

It could take energy prices some time to recover sufficiently to allow the MLP to profitably access equity markets. Thus Enbridge Energy Partners will probably have to continue to mostly rely on debt, which made up 84% of the capital it raised in 2015, to refinance its existing $7.9 billion in total debt, as well as fund further growth over the next few years.

This makes me immensely skeptical that the MLP can achieve analysts' long-term distribution growth targets. That's especially true when you consider what several years of low oil prices might mean for the MLP's growth outlook.

... profitable growth prospects are dimming in a world of cheaper energy
One thing Enbridge Energy Partners has going for it is a large dropdown pipeline of growth opportunities that Enbridge provides. In fact, Enbridge has eight projects that it could sell to its MLP to provide sufficient DCF growth to increase the coverage ratio and not just secure the existing payout, but potentially allow for its future growth as well.

However, with its debt/EBITDA or leverage ratio increasing from 4.3 in 2014 to 4.6 in 2015,and rising interest costs already making DCF growth difficult, Enbridge Energy Partners might not be able to execute on this growth potential. Not unless its unit price increases and allows it to raise substantial growth capital via the sale of new units.

This is especially true given that Enbridge Energy has a lot of exposure to Canadian tar sands and North Dakota Bakken crude. Canadian tar sands are much more expensive than traditional oil production, and Western Canadian Select and Bakken oil also sell at substantial discounts -- around $13 and $22 per barrel, respectively -- compared with its West Texas Intermediate counterpart, which is around $32 per barrel. In fact, Enbridge has already announced that two major oil pipelines meant to serve Canadian tar sands and the Bakken have been postponed until 2019.

Which brings up another concern for Enbridge Energy Partners: the fact that it's likely to face continued challenges growing profitably even with projects it has adequate funding to complete. That's because the MLP's weighted average cost of capital over the past 12 months has been 8.18%, far higher than its return on invested capital (ROIC) over that same time period of just 5.46%.

As Enbridge is forced to take on more and more debt, potentially at higher interest rates over the next few years, new projects may not be enough to preserve the current distribution.

Bottom line
Unlike many of its higher-quality peers, Enbridge Energy's price collapse over the past year doesn't present a good long-term income opportunity. With a highly leveraged balance sheet, over-reliance on debt markets that could dry up should energy prices continue falling, and very low ROIC, I question the MLP's ability to grow its way to a sustainable and secure payout.

Therefore, any investors considering investing new money into Enbridge Energy Partners today need to understand that it represents a highly speculative, short-term, and high-risk bet on a relatively strong and prolonged recovery in oil prices.

Adam Galas has no position in any stocks mentioned. The Motley Fool recommends Enbridge Energy Partners, Enterprise Products Partners, and Magellan Midstream Partners. We Fools may not all hold the same opinions, but we all believe that considering a diverse range of insights makes us better investors. The Motley Fool has a disclosure policy.