Software giant Intuit (NASDAQ:INTU) doesn't compete in many markets, but where it does, it dominates. Small-business owners are probably intimately familiar with QuickBooks, while those willing to prepare their own tax returns have likely heard of TurboTax and may have used it extensively.

But what of Intuit's actual business? These three charts will give investors insight into the company, what factors make it tick, and what figures influence its share performance.

1. The number of subscribers to QuickBooks Online
Intuit, like many other software firms, is in the midst of transition. The QuickBooks desktop application has long been a core staple of many small businesses, helping them keep track of their expenses, manage their bills, and pay their employees. It's been a solid business for Intuit, forming the backbone of its operations. Over the last several years, however, the company has been shifting its focus to QuickBooks Online (QBO), its cloud-based, subscription-based alternative.

The growth of QBO, in the form of additional subscribers, has been a highlight of Intuit's recent earnings reports. By shifting its customers from occasional large application purchases to regular monthly payments, Intuit's revenue should become more predictable over time. It will also gain a deeper relationship with its customers and an ability to service new customers who may have previously balked at the prospect of a large up-front expense. As the following chart shows, the number of QBO subscribers has grown tremendously in recent quarters. 2. Where Intuit's revenue comes from
Intuit's management breaks its business down into several different segments. The following chart offers investors a visual breakdown of the relative importance of Intuit's various businesses to its top line.

As investors can see, Intuit's business is evenly split -- tax accounted for about half the company's sales last year, while its small-business software and services generated most of the remaining revenue. Intuit's consumer tax business is primarily composed of its TurboTax software sales, while its pro tax business is made up of software sold to accountants and tax professionals. Intuit's small business desktop segment is dominated by sales of its QuickBooks desktop software and related services, including payroll subscriptions and payment services. The same is true for small-business online, but rather than desktop applications, customers are using QBO and its related services.

3. How Intuit's business has been performing
2015 was an unremarkable year for Intuit shareholders. In August, the stock plunged after the company announced that it would sell off several of its non-core business units, including its trademark personal finance software, Quicken. Shares later recovered, but the stock finished the year up less than 6%, underperforming the broader Nasdaq Composite. On a longer-term basis, however, Intuit has been a fairly reliable performer, outperforming the index over the last five years, and growing business metrics including revenue and operating cash flow to a strong degree. 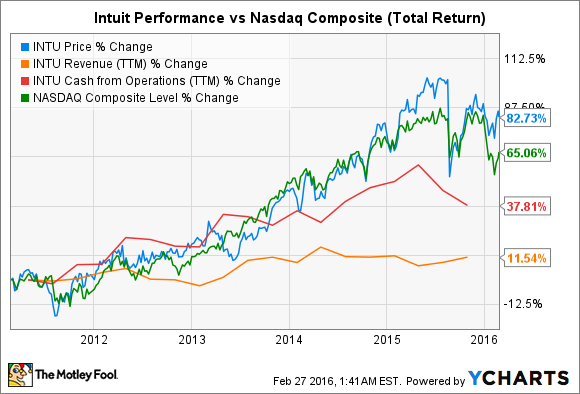 Intuit has seen its sales rise nearly 40% over the last five years, and it foresees additional sales growth going forward. For its fiscal year 2016 (which ends in July), it expects its revenue to grow another 8% to 10%. That growth will be broadly based, with the company's small-business and consumer tax units enjoying 5% to 9% revenue growth.