Poor sales for its recently launched Triceric have investors heading for the exit.

What: Shares of Rockwell Medical (RMTI -4.19%) were tumbling 31% at 12:30 p.m. EST Tuesday due to reporting fourth quarter financial results, after the bell Monday, that disappointed investors. 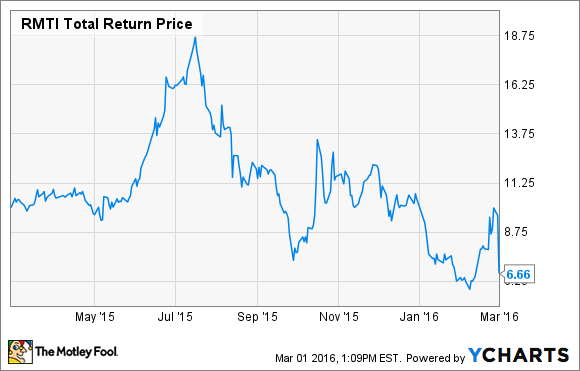 So what: In its first few months on the market, sales of Rockwell Medical's newly launched drug, Triferic, an iron replacement therapy for chronic kidney disease patients, failed to win traction.

In the past, iron replacement therapy has been done in dialysis centers using IV infusion, a method that can lead to patient complications, and because of those risks, industry watchers had been hopeful Triferic could win away market share.

Unfortunately, that market share has been hard to come by.

Even worse, the company's gross profit slipped by 3% year over year to $2.1 million in the fourth quarter, and the combination of poor sales and rising expenses led to Rockwell Medical losing $5.8 million in the three-month span.

Now what: Rockwell Medical's CEO Robert Chioini attempted to put a positive spin on the performance, referring to the year as "exceptional," but his optimistic assessment shouldn't be surprising. In his Q4, 2014 financial press release he used the word "exceptional" to describe his company's performance, which included a tepid 3.5% revenue increase and in the company's Q4, 2013 earnings press release he described Triferic's phase 3 clinical data as "exceptional" too.

Overall, until real-world uptake of this drug proves Triferic is worthy of Chioini's accolades, I don't see a compelling reason to buy shares in Rockwell Medical, even at these lower prices.

Rockwell Medical Stock Upgraded: What You Need to Know
356%