Flexible dividend
Although Rio Tinto's 2015 underlying profit of $4.5 billion more than covered its annual dividend cost of $4.1 billion, the company's estimated underlying earnings in 2016 of $2.7 billion at current iron ore prices won't be enough to cover the dividend. Given that paying more in dividends than making in profits is unsustainable, Rio management took the long view and scrapped its progressive dividend policy to preserve the company's balance sheet.

A progressive dividend is a payout policy in which the dividend rises at least in line with the rise in underlying earnings, and the dividend doesn't decline if earnings declines. Rather than paying a progressive dividend, Rio management has instead committed to paying a flexible dividend with which the board decides the appropriate dividend payout at the end of each financial period. The board's goal is to pay 40% to 60% of the company's underlying earnings through the cycle by way of the ordinary dividend, special distributions, and stock repurchases.

Capital expenditures are lower, but production can hold steady 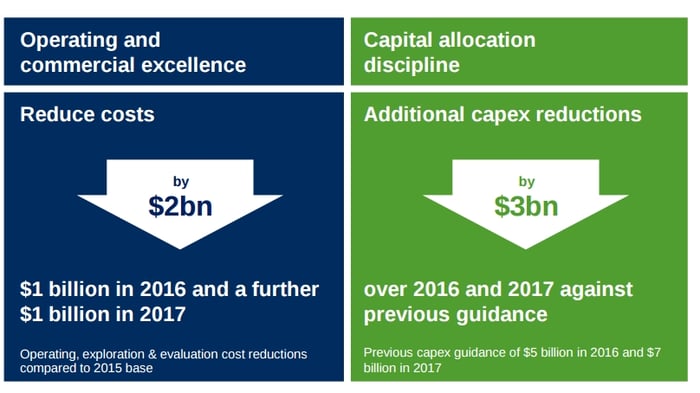 Rio Tinto's debt is manageable, and the company could make some acquisitions 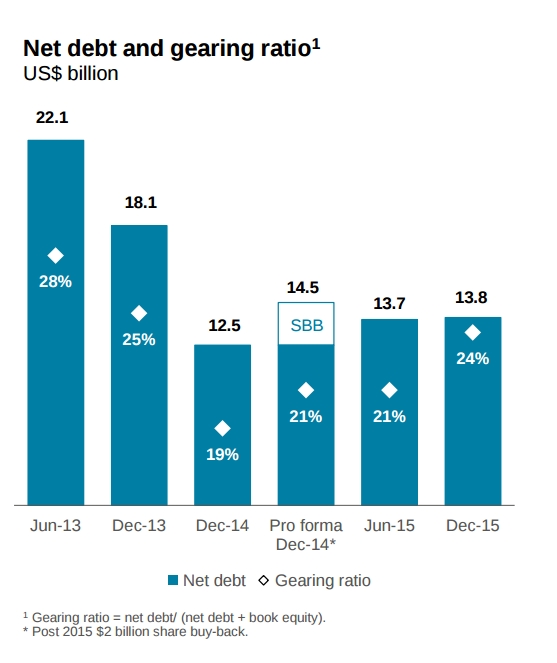 Rio Tinto has a strong balance sheet. The company has a gearing ratio (a measure of the degree to which an organizations' activities are funded by owner vs. creditor capital) of 24%, well within management's 20%-30% target range, and the company's net debt of $13.8 billion in debt is $700 million better than that of 2014. On a relative basis, Rio Tinto's balance sheet is miles better than that of its smaller competitors such as Freeport-McMoRan (NYSE:FCX), which is substantially more leveraged and has exposure to crude.

Rio could potentially use its stronger balance sheet to acquire assets of distressed commodity companies such as Freeport-McMoRan. Although it hasn't pulled the trigger on any purchases yet, Rio management has said that it expects quality accretive assets to be put on the market as the commodity bear market rolls forward.

Investor takeaway
While the dividend cut is painful, management made the right choice for long-term investors. Rio Tinto will survive and will have the balance sheet to acquire distressed companies if the right opportunities present themselves. Although the slowdown in China might worsen and a recession might occur in the United States, demand for iron ore, copper, and other commodities that Rio Tinto produces will rise in the long run as emerging markets develop and Rio Tinto will deliver substantial value to its shareholders.