Few companies have the clout and global reach to act as a barometer of the global economy. Caterpillar (CAT -1.15%) is one of those few because of its active presence in the global construction, resources, and agriculture markets. And it's taken it on the chin with the mining and commodities slowdown.

Shares are down over 24% alone in the past year and have hit several 52-week lows. The latest quarter won't end the discontent. The depressed global commodity market significantly pressured fourth-quarter earnings, as the company has been forced to cut jobs and temper expectations for the coming quarters.

Let's examine the key issues for investors and whether we have a margin of safety going forward. 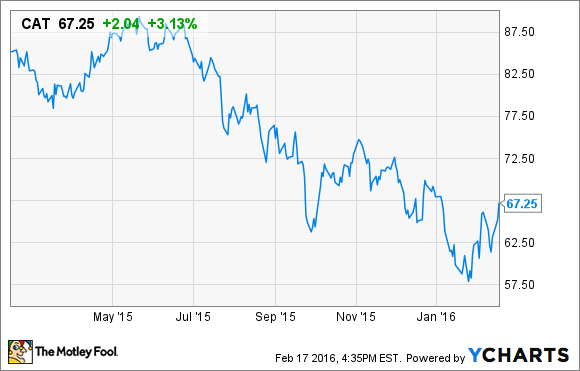 "Cost management, restructuring actions, and operational execution are helping the company while sales and revenues remain under pressure from weak commodity prices and slowing economic growth in developing countries," Chairman and CEO Doug Oberhelman noted in a recent conference call on January 28, 2016.  .

Despite Caterpillar's less-than-stellar earnings report, the company's balance sheet is still strong and gained market position in some segments. As Oberhelman said in the same conference call: "Our balance sheet is strong, our product quality remained at high levels, we gained market position for machines for the fifth year in a row, inventory levels have declined and are well positioned as we look forward to 2016, and our safety levels are world class. We are benefiting now and expect to even more in the future when markets rebound."

With that said, sales and earnings declines have created an aura of uncertainty around the company.

What's next?
With the global demand slowdown, lower demand is likely to pressure earnings for the coming quarters, barring a sudden surge in demand. Revenues and earnings are expected to come under pressure, and management says it will be a challenging year. In addition, the company plans on cutting 10,000 jobs over the next three years.

Is there a margin of safety for investors?
Management doesn't expect much from commodity prices and global growth. The company has already guided down expectations for the year, with a projected 10% drop in revenue and full-year EPS of $3.50. Fortunately for Caterpillar, its strong balance sheet should allow it to withstand a prolonged down cycle.

When calculating a company's earnings power, it's imperative that investors understand (1) the future of the industry, (2) the industry's cycle, and (3) the company's staying power. To that end, many of the industries Caterpillar operates in are expected to grow over the next few decades. For example, PricewaterhouseCoopers expects that "the volume of construction output will grow by more than 70% to $15 trillion worldwide by 2025."

Typically, industry cycles last an average of seven years. In calculating the back-of-the-envelope earnings power at Caterpillar, using seven-year average revenue of $51.26 billion and seven-year average net profit margin of 6.27%, we get earnings power of $5.34 per share. Caterpillar has historically traded at a 10-year average P/E multiple of 14.54, so I use this as a mid-line multiple. That multiple gives us an earnings power estimate of $77.72 per share. With that estimate, and with current shares trading $67.25, the company appears to be moderately undervalued.

Also, Caterpillar is well known as a higher-quality business, so it wouldn't surprise me to see the company trade at a higher multiple in the future. I also expect future income to be much higher over the long term as the company grows, so our assumption appears to be somewhat conservative with construction output expected to grow to $15 trillion by 2025 as previously noted. 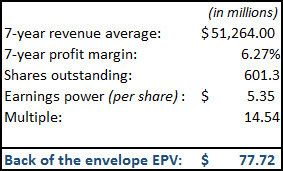 It's difficult to ignore the possibility of a continued lack of demand in the global economy. Even so, Caterpillar has generated positive free cash flow in each of the past 10 years and averaged over $5 billion in free cash each of the past two years. Also, the company has decreased long-term debt from $27.78 billion to $25.24 billion in the past year alone, a 9% reduction.

It's always a possibility that a downturn could take longer than expected. However, Caterpillar is making the right moves to ride out the current down cycle, and the debt appears reasonable, with interest expense eating up around 30% of operating income. Debt-to-equity stands at 2.57, while the debt-to-asset ratio is 0.32. 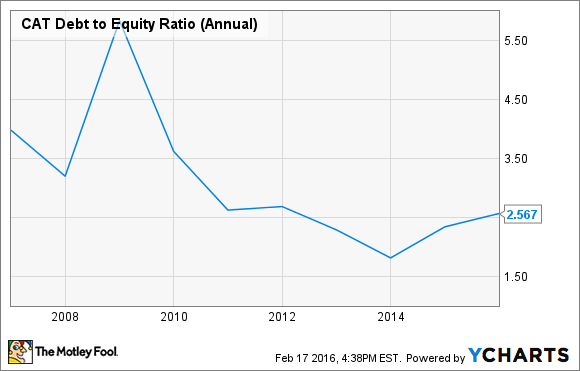 Tying it all together
Throughout Caterpillar's history, the company has been successful in navigating the various industry cycles. Because of the diversified business model and management team in place, I would expect this trend to continue.

In addition, when you combine a strong balance sheet, great management, and a 4.62% dividend, the company looks quite appealing at current levels, with the company trading below its earnings power valuation and at only 11.28 times free cash flow. Foolish long-term investors should welcome the pullback in shares as a good entry point to acquire stock in a great company.