Please ensure Javascript is enabled for purposes of website accessibility
Log In Help Join The Motley Fool
Free Article Join Over 1 Million Premium Members And Get More In-Depth Stock Guidance and Research
By Joe Tenebruso - Mar 2, 2016 at 9:43AM

The brand advertising platform grew its sales by more than 60% in the fourth quarter. 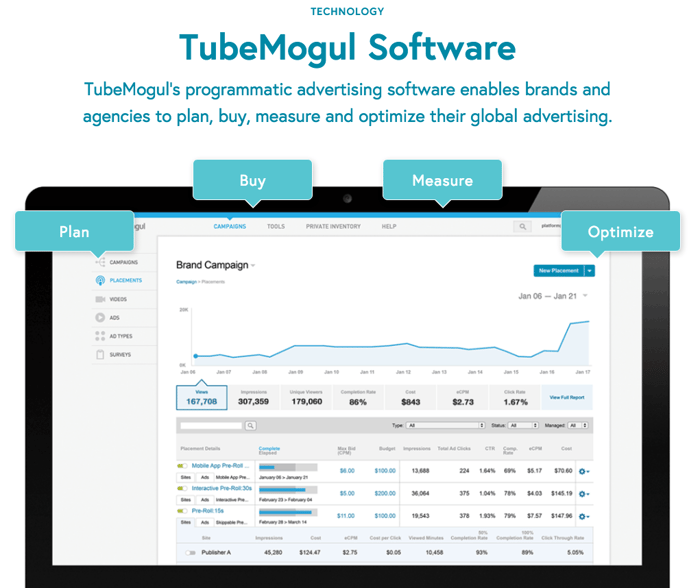 TubeMogul (TUBE) reported fourth-quarter results on Feb. 29. The company is benefiting from the rapid adoption of both its self-serve and managed brand advertising offerings, which is boosting revenue and improving profitability.

What happened with TubeMogul this quarter?
Total spend -- essentially the amount that TubeMogul's customers spend through its platform, including the cost of media purchases and TubeMogul's fees -- jumped 63% year over year to $134.5 million.

Spend on Tube Mogul's Platform Direct offering, which allows advertisers to run campaigns through a self-serve model, grew 56% to $98.2 million, representing 73% of total spend. And spend on the company's Platform Services offering, which allows advertisers to specify objectives and have TubeMogul's team execute the campaign on their behalf, surged 83% to $36.3 million.

That strong rise in total spend helped drive a 62% year-over-year increase in revenue to $58.5 million.

Gross profit rose 52% to $39.2 million, with gross margin falling to 67%. That was down from 71% in the fourth quarter of 2014, mostly because of the out-performance of Platform Services, which has a lower gross margin than Platform Direct.

"We finished 2015 with strong financial results overall, but more importantly our continuous innovation sets us up for another successful year in 2016," said CEO Brett Wilson in a press release.