What: Despite the fact that the price of crude oil is relatively flat today, several oil stocks are rallying sharply. Leading the move higher are EP Energy (EPE), Whiting Petroleum (WLL), Baytex Energy (BTEG.F 9.81%), Chesapeake Energy (CHKA.Q), and California Resources (CRC), which all rocketed by the mid-morning: 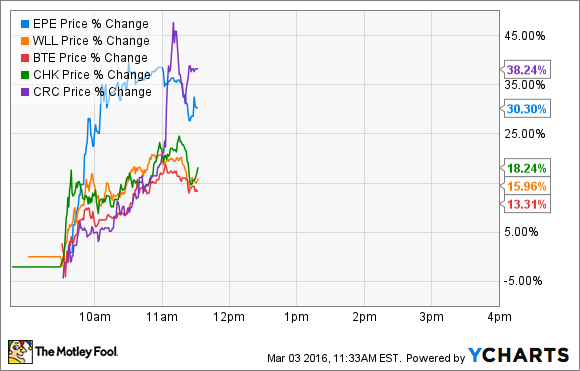 So what: Of that group, California Resources is enjoying the biggest rally despite the fact that oil isn't budging and it had no company-specific news. In fact, the only news of that sort recently was an announcement on Tuesday by Occidental Petroleum (OXY 2.55%) that it was distributing its remaining interest in California Resources to its shareholders via a special dividend. While that eliminates a big overhang, it could lead to more selling pressure in the future should current Occidental Petroleum investors decide they don't want to also own California Resources.

Meanwhile, EP Energy, Chesapeake Energy, and Whiting Petroleum didn't have any company-specific news today. That said, yesterday we did learn that Chesapeake Energy's founder and former CEO died in a car crash the day after being indicted on antitrust charges. In a bit of a macabre way, his passing could put an end to some of the company's legacy legal issues.

Finally, Baytex Energy had some noteworthy news after it reported its fourth-quarter results. One thing that investors liked was that it pointed out that the net asset value of its oil and gas reserves stood at $4.3 billion, or $11.05 per share, which is well above the current stock price. Furthermore, the company detailed a much more conservative plan for 2016, which will result in its capex budget falling 33% from its initial expectations and 53% from last year's spending level.

Now what: In spite of the dearth of significant news, oil stocks are sharply higher today. We're left then to speculate, which doesn't do us any good. What investors should focus on instead is the fact that most of these companies have a critical need for a meaningful increase in the oil price in order for them to be sustainable over the long term. Until that happens, any volatility will be noting but noise.