What: Shares of The Habit Restaurants (HABT) slumped on Thursday following the burger chain's fourth-quarter earnings report. While the company posted rapid revenue growth driven by new restaurant openings, the numbers were mixed relative to analyst expectations. The stock closed down about 12% on Thursday.

Habit reported non-GAAP net income of $0.05 per share, up from $0.02 during the prior-year period, and $0.01 better than analyst expectations. On a GAAP basis, EPS came in at $0.04, up from breakeven during the fourth quarter of 2014. Food and paper costs decreased as a percentage of revenue, helping to boost GAAP operating margin to 2.9%, up from 2.3%.

For 2016, Habit expects revenue in a range of $286 million to $290 million, with company-owned comparable sales expected to grow by 3%. Between 30 and 32 new company-owned stores are planned for the year, with four-to-six franchised locations also in the mix.

Now what: Shares of Habit have tumbled since the company went public in late 2014, and after the drop on Thursday, the stock is about 54% below its 52-week high. Comparable-sales growth is positive, but far from impressive, and with almost all of Habit's growth coming from new restaurants, investors' expectations are now far-more realistic compared to one year ago. 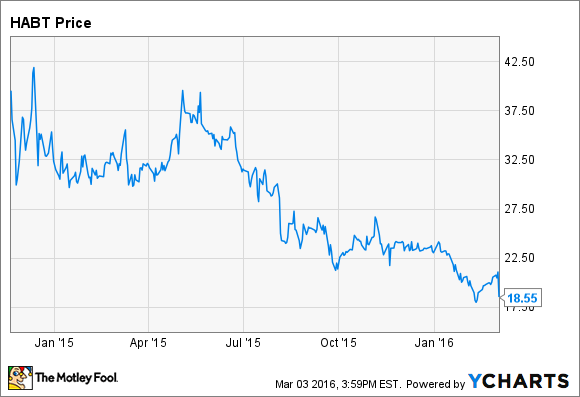 Habit's fourth quarter wasn't bad, but sluggish comparable-sales growth, and guidance calling for that trend to continue into 2016, seem to be giving investors pause.