Please ensure Javascript is enabled for purposes of website accessibility
Log In Help Join The Motley Fool
Free Article Join Over 1 Million Premium Members And Get More In-Depth Stock Guidance and Research
By Tyler Crowe – Mar 4, 2016 at 11:35AM

Customers that keep asking for cheaper contracts, a slower recovery in international & deepwater markets, and some uncertainty around its recent acquisition of Cameron International could push shares of the world's largest oil services provider toward the watery deep.

The oil and gas market has taken its toll on just bout everyone in the energy industry, but some have handled the downturn better than others. So far, Schlumberger (SLB -0.66%) has been one of the companies that have survived it relatively better than others. Deep cuts to personnel and other costs have allowed the company to maintain its sizable lead in margins over the past several quarters. The deeper we go into this downturn, though, there are new challenges that could continue to put pressure on Schlumberger's shares. Let's look at three potential threats that could lead to a weakening of Schulmberger's business and bring its stock price with it.

Continued pricing pressure from major customers
As an oil services company, Schlumberger and its peers are subject to the spending habits of its customers, the producers. When they aren't in the mood to drill for oil, there is simply less work available for Schlumberger. To make the issue even more challenging, less work also means lots of idled equipment, and that leads to pricing pressure on its services.

According to ExxonMobil's (XOM -1.93%) recent investor presentations, oil majors have been able to negotiate service contract prices that are 15-40% less than they were back in 2014. This, of course means that services companies are bearing the brunt of this price deflation. 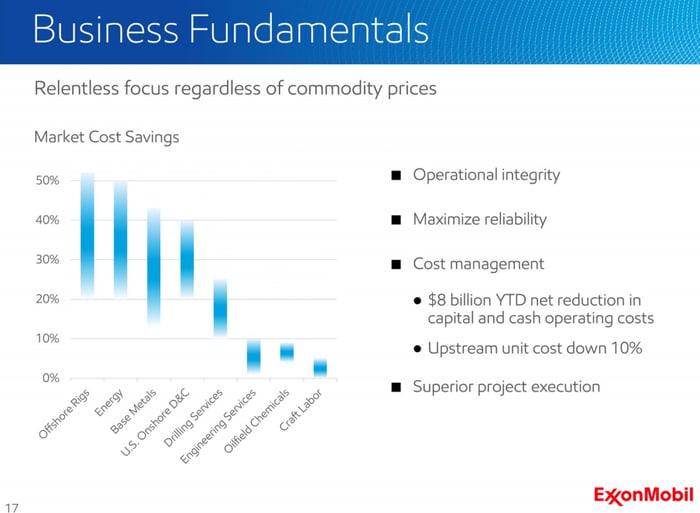 If oil prices remain low and producers lose even more appetite to drill, Schlumberger and others will be forced to compete even more to keep its equipment and crews active, and will likely have to cut service rates even more than they already have. Any further decline in revenue and margins would likely lead to lower share prices.

Deepwater and international markets starting to feel the pinch
For the most part, Schlumberger's earnings have held up better than its direct competitors Hallburton (HAL 0.12%) and Baker Hughes (BHI) because it has a much more diverse geographic footprint. Where Halliburton and Baker Hughes are highly levered to the North American market, their results have suffered more in recent quarters because of the sharp decline in shale drilling.

The longer this price decline continues, though, longer tail development projects such as offshore platforms and deepwater exploration have started to dry up as well. As these sorts of projects start to roll off, chances are Schlumberger will suffer more because these types of projects are more closely tied to its business, and send shares lower as a result.

This could also translate to a slower rebound for Schlumberger. Since shale is a much shorter development cycle, it will be able to react to rising oil prices much faster, and companies like Halliburton & Baker Hughes will be able to ride the wave toward better days.

Cameron merger not meeting expectations
Last last year, Schlumberger made an offer to buy Cameron International (CAM.DL) for $12.7 billion. This is a pretty unique acquisition because Cameron is mostly an equipment manufacturer that specializes in subsea infrastructure while Schlumberger is a services provider. According to Schlumberger, the acquisition of Cameron will help to streamline the process of bidding for jobs and will provide its clients with a much more comprehensive service.

The argument itself makes sense, and the two companies had found success working together before on its OneSubsea joint venture. However, there are two things that might make the Cameron deal not as effective as Schlumberger had originally planned. According to industry executives, this is a pretty significant change from the typical bidding process for services and equipment, and it may not be well received. Most producers prefer to shop around for equipment to get the best price possible, and not having that option may prove troublesome for Schlumberger if it tries to use these package deals as a selling point.

Another dynamic that could disrupt this plan is a recent deal struck between Diamond Offshore and General Electric that could have wider implications for equipment manufacturers if proven successful. Instead of the traditional method of equipment sales. General Electric will lease subsea blow out preventors to Diamond and ensure maintenance and performance metrics on that equipment. If proven successful, it could either eat into Cameron's subsea equipment sales or possibly change its business model that may not be conducive to Schlumberger's packaged offerings.

Either way, if the Cameron acquisition doesn't live up to its promise as a differentiator for Schlumberger, it could make investors sour on its stock.

What a Fool believes
In a market downturn like this, it's always helpful to be in the enviable position as the biggest fish in the ocean. Schlumberger's size and more diverse revenue base has allowed the company to weather the storm much better than most of its peers. 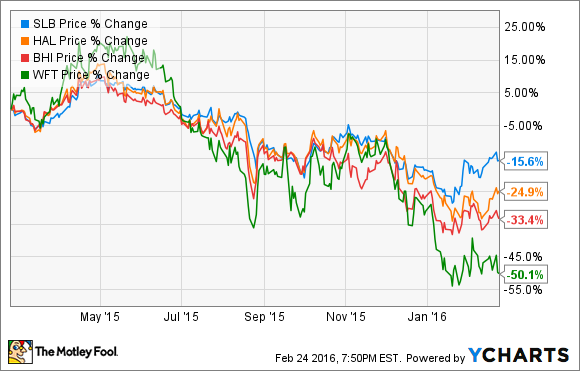 That being said, the company isn't completely immune to what could be some major challenges to its industry leader position. Of the three issues above, a latent decline and delayed recovery in international drilling activity has the chance of having the deepest impact on the company's profits and stock price. Over the next couple of years as the oil market balances and drilling activity picks back up again, investors should watch where that new activity is happening. If shale drilling dominates the early parts of the recovery, it could push deepwater and longer tail development projects -- Schlumberger's bread and butter -- out of the picture.