Given US Bancorp’s profitability and performance over the past decade, it’s hard to envision a scenario under which its stock price won’t increase over the foreseeable future.

Despite being one of the most stable and profitable banks in the United States, US Bancorp (USB -0.09%) has nevertheless seen its shares fall in unison with the broader market since the beginning of the year. I took advantage of the drop by buying shares myself, based in large part on my belief that there are multiple catalysts that will cause its share price to retrace the lost ground, three of which are discussed below. 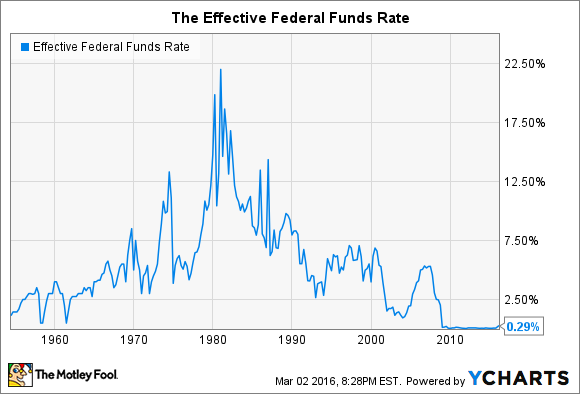 US Bancorp estimates that an immediate 50 basis point (0.50%) boost to interest rates would increase its annual net interest income by 1.78%, or $196 million. And if rates were to move up gradually over the next 12 months by 200 basis points (2%), US Bancorp estimates that its annual net interest income would increase by 2.69%, or $295 million.

2. Increased dividend
A second catalyst that should fuel an increase is US Bancorp's share price is a higher dividend. Big banks are unique when it comes to dividends because they must get approval from the Federal Reserve to boost their quarterly payouts. This happens once a year as a part of the comprehensive capital analysis and review process, or CCAR, the results of which are scheduled to be announced in June.

While anything could happen, there's little reason to think that US Bancorp wouldn't ask for a dividend increase this year and that such a request wouldn't be approved. The Minneapolis-based bank has raised its dividend consistently over the last few years, growing it from $0.50 per share on an annual basis in 2011 to $1.01 per share in 2015. Its ability to do so is grounded not only in its more-than-adequate capital base, but also in its industry-leading profitability, which generates an ever-growing amount of distributable capital each year. 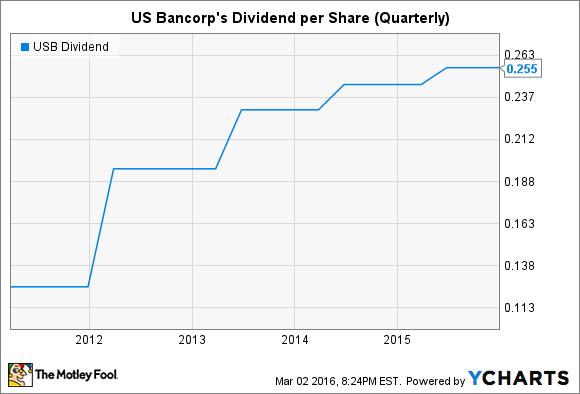 Shareholders seem safe to assume, in other words, that another dividend increase will be announced sometime this year. And when that happens, it also seems safe to assume that US Bancorp's share price will positively reflect the news.

3. Fewer economic headwinds
If there's a silver bullet that could immediately impact US Bancorp's stock price, as well as the level of the broader market, it's an improved global economic outlook. The main problems right now revolve around slowing economic growth in China as well as Britain's potential exit from the European Union. These, combined with persistently low oil prices, are widely blamed for ending the seven-year bull market in stocks.

Stocks have been hit across the board since the end of last year, with little regard for the quality of the underlying companies or their exposure to the potential threats. In US Bancorp's case, this has caused its share price to diverge from its book value per share for the first time since the financial crisis, as you can see in the chart below. 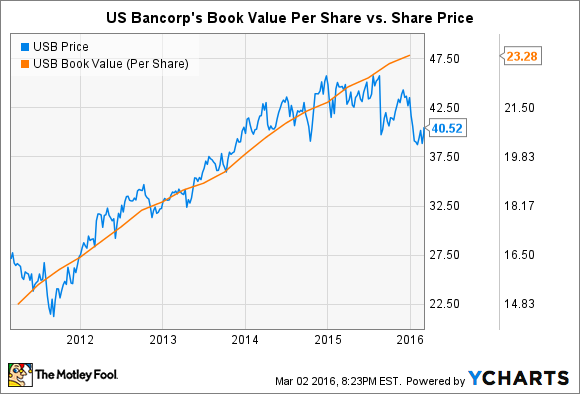 Once the economic storm clouds clear, then, it's my belief that US Bancorp's stock will close this gap. And when you combine this possibility with the rate at which US Bancorp's earnings are compounding -- it leads the bank industry with a 14% return on average common equity -- then it's hard not to get excited about the long-term prospects of its stock.

John Maxfield owns shares of US Bancorp. The Motley Fool has no position in any of the stocks mentioned. We Fools may not all hold the same opinions, but we all believe that considering a diverse range of insights makes us better investors. The Motley Fool has a disclosure policy.