What: February was another tough month for Chesapeake Energy (CHKA.Q) investors after the stock ended the month down 18.7%. However, it could have been much worse, with the stock down as much as 50% before recovering thanks to better-than-expected news on asset sales. 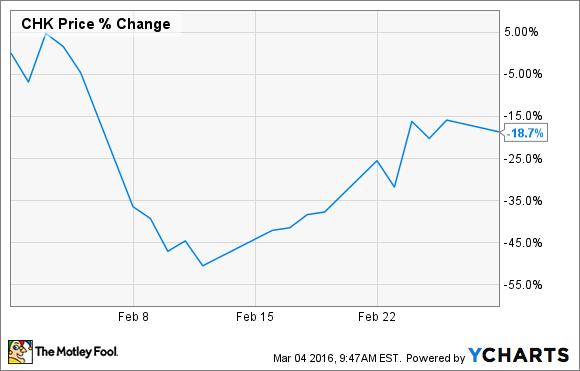 So what: Chesapeake Energy's stock was cut in half after a report surfaced that it had hired attorneys for restructuring, which the market thought was because it was going to file for bankruptcy. The company, however, almost immediately put out a statement saying that it has worked with those advisors since 2010 to strengthen its balance sheet and has "no plans to pursue bankruptcy." Instead, its goal is to "maximize value for all shareholders."

On top of that, the company outlined a much more conservative capital spending plan for 2016, which will see it cut its budget by 57% from what it spent last year. That will result in its production declining by as much as 5%, which is also seen as a positive given that the market remains oversupplied with oil and gas.

Now what: After initially freaking out that Chesapeake Energy was about to declare bankruptcy, the market slowly began to realize that it's not going to happen, at least any time soon. That's after the company bought itself more time after selling a boatload of assets, with expectations for more sales to be made in 2016. Further, it finally put an end to its wild overspending to grow production, which will not only prevent it from burning through more cash, but should help the market get back into balance. It's a ray of hope in the midst of a very though stretch for the company.