Please ensure Javascript is enabled for purposes of website accessibility
Log In Help Join The Motley Fool
Free Article Join Over 1 Million Premium Members And Get More In-Depth Stock Guidance and Research
By Daniel B. Kline - Mar 4, 2016 at 6:47PM

The winners probably won't shock anyone, but the company whose satisfaction score dropped the most might surprise you.

While overall satisfaction with retailers has fallen for two straight years, according to the American Consumer Satisfaction Index, online sellers have fared a lot better than their physical counterparts.

Customer satisfaction with the retail sector fell in 2015 by 2.6% to an ACSI score of 74.6. Satisfaction with online retailers dropped by 2.4%, but the segment scored an overall 80 -- higher than all five other segments covered by the index: department and discount stores, gas stations, drug stores, specialty retail stores, and supermarkets. Of the six categories, only gas stations saw a rise in score, which ACSI attributes to the lower cost of gas.

But it was Internet retail that put up the best numbers, despite its slight overall drop in final score.

"During the last two months of the year, retail sales rose about 3%. But a greater share of those sales were conducted online, as foot traffic to retail brick-and-mortar stores fell 6.4% in the holiday shopping months of November and December," wrote ACSI. "During the critical period holiday season, e-commerce sales were up about 13% year over year."

Which are the top Internet retailers?
It's worth noting that while Amazon.com (AMZN -2.78%) topped its segment with an ACSI score of 83, that was a worse score than Wegman's (86) and tied with Trader Joe's (83) in grocery stores. It was, however, good enough to beat top specialty retailers Costco (81), and L Brands (81) as well as Nordstrom (82), the leader among department and discount stores.

But while Amazon wasn't the top-ranked company overall, Internet retail showed broad strength. The other segments saw their total scores pulled down further by the companies that ranked at the bottom. 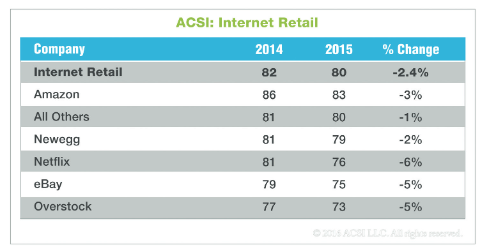 ACSI viewed the results as a big win for Amazon, noting that its "high customer satisfaction helps explain why it accounted for 43% of all online sales in November and December." That's a 22% year-over-year increase.

The biggest surprise on the online chart might be the fact that Netflix (NFLX -0.90%) had the steepest drop of any company in the category. But ACSI believes there's a straightforward reason for that decline.

"Netflix raised its subscription price for new customers in October and existing customers will be affected later this year, all of which may be contributing to the company's 6% ACSI drop to 76," according to the report.

The most telling part of the study in the online space might be the "all other" category, which ACSI defines as "smaller e-retailers as well as the online channel of traditional brick-and-mortar stores." Satisfaction in that subset slipped 1% to 80. "This stable customer satisfaction shows that the online channel remains popular and pleasing even though online revenues are a fraction of brick-and-mortar sales," wrote ACSI.

Bad news for traditional retail
In reality, online retail -- at least the part of it not tied to traditional brick-and-mortar retailers -- is dominated by Amazon and a few other players. These digital-only stores generally have a pricing advantage over their physical world counterparts because their overhead is lower.

Add higher customer satisfaction to lower prices, and it makes sense that traditional retail is losing market share. Buying from Amazon or using Netflix is convenient and if those companies deliver a better experience than stores which people actually have to travel to than they will be able to win customers over at the expense of their brick and mortar rivals.

All retailers need to be concerned with the year-over-year drops, but physical stores have the most to worry about. Consider this report, along with the holiday sales numbers, as a wake-up call to brick and mortar retailers: improve your relationship with your customers or lose them.