The winner is a little bit surprising given how disliked he once was.

If you saw The Social Network, the movie about the creation of Facebook (META 2.79%) it's hard to imagine that the company's founder Mark Zuckerberg would go on to become someone well-liked by the public.

The man/boy portrayed in that movie was not so much a jerk as he was oblivious to the feelings of others. That version of Zuckerberg was a genius above all else who never quite understood that most people did not see the world in the same way he did. In some ways the founder/CEO came off like a star athlete who does not quite grasp why other players aren't better.

But, in the years since the time portrayed in that film, Zuckerberg has gained some humanity. He got married, had a child, and has shown a willingness to poke fun at himself, like his recent mocking of his own wardrobe by posting a picture of his closet featuring only grey T-shirts and hoodies.

Zuckerberg has turned around his image by growing up a little, adding some self-awareness, and by people simply being in awe of how smart he is. Still, it's a little bit surprising that the Facebook boss tops all other technology CEOs in a new poll conducted by Morning Consult.

Zuckerberg, his wife, Priscilla, and his son Max. Source: Facebook

Zuck is on top
Zuckerberg not only tops the poll of 1,935 registered voters when it comes to people having a favorable opinion of him, he also has more name recognition than his nearest competitor, Apple (AAPL 0.79%) CEO Tim Cook.

Forty-eight percent of respondents surveyed had a favorable opinion of the Facebook boss, while 31% of people did not know who he is, according to Morning Consult. Cook scored 39% favorable, but suffered from 44% of the respondents not knowing who he is. That's much better than Microsoft CEO Satya Nadella who came in fourth under favorable opinion but was not known by an astounding 59% of people asked.

"The only other tech CEO with similar recognition and favorability is Amazon's Jeff Bezos, with 38% percent of respondents saying they like him," wrote Fawn Johnson and Amir Nasr for Morning Consult, who noted that "about half haven't heard of him or have no opinion." 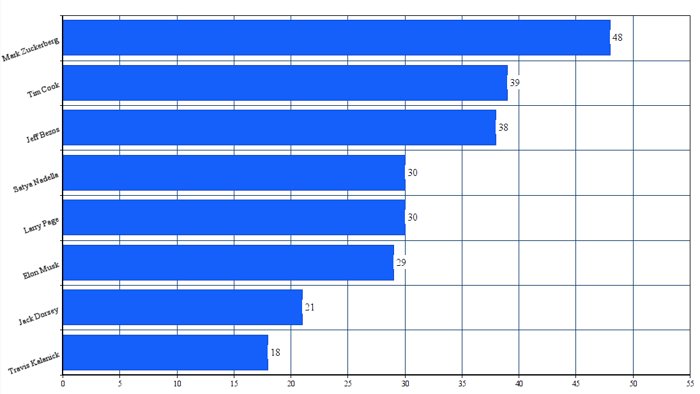 The poll asked respondents if they had a favorable opinion of the CEOs. Source: Morning Consult

While Zuckerberg clearly topped the likability portion of the survey, he may have been helped in that area by the fact that Apple is currently fighting the Federal Bureau of Investigations over whether it should break the encryption on an iPhone used by a terrorist. Cook has come out against doing that and 51% of people surveyed by Morning Consult believe Apple should cooperate while only 33% agree with Cook's stance.

Why does this matter?
Former Apple CEO Steve Jobs proved the value of having a CEO who connects with the public. In Facebook's case, Zuckerberg gives a human face to a company which has a dedicated user base that doesn't always agree with its decisions. People tend to freak out whenever the company makes a change to its core product but faith in its leader mitigates those fears. Zuckerberg's presence as a really smart guy who looms over everything is reassuring in a way that gives the company leeway that those with less-liked leaders do not have.

Clearly Zuckerberg is not the same person he was in his company's early days, but he has probably also benefited from the rise of geek culture. Shows like Big Bang Theory, which launched in 2007 -- three years after Facebook's debut -- and the rise of events like Comic-Con have made smart, semi-awkward geniuses way more mainstream.

We're OK with Sheldon Cooper being a little weird because we understand that he's smarter than we are. It's the same with Zuckerberg (and to a lesser extent CEOs like Elon Musk). That makes Facebook a little cooler and its stumbles a little more palatable because we accept that while the ride may be rough, the destination is worth it.

Daniel Kline owns shares of Apple, Facebook, and Microsoft. He likes Zuck too and knows a lot of hard-to-like geeks who he considers friends. The Motley Fool owns shares of and recommends Amazon.com, Apple, and Facebook. We Fools may not all hold the same opinions, but we all believe that considering a diverse range of insights makes us better investors. The Motley Fool has a disclosure policy.