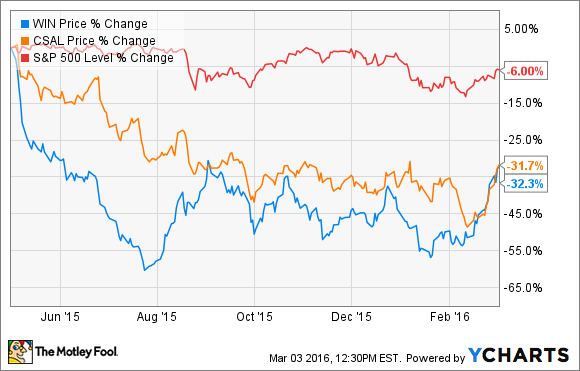 What: Shares of Windstream Holdings, (NASDAQ:WINMQ) soared 30.3% higher in February, according to data from S&P Global Market Intelligence. The big move continued a sawtooth pattern in Windstream's stock chart, stretching back to the spinoff of Communications Sales & Leasing (NASDAQ: CSAL) in the spring of 2015.

So what: Investors started sniffing good news in Windstream's vicinity around the middle of February, when telecoms of every stripe started reporting strong quarterly results. When the regional carrier's own fourth-quarter report rolled around near the end of the month, it turned out to be a muscular quarter and well ahead of Wall Street's earnings forecasts. Share prices rose as much as 14% the next day alone.

Now what: The company retired $3.5 billion of debt in fiscal year 2015, helped by the CS&L spinoff. That will continue in 2016, as Windstream starts selling some of its remaining 20% stake in the networking hardware operation. Lightening that load will lift the bottom line, since interest payments consumed more than 14% of Windstream's top line in 2015. Anything the company can do to get away from $5.2 billion in long-term debt is helpful.

In February, Windstream sketched out a path toward a lighter debt load, and proved that it can deliver solid business results at arm's length from CS&L's hardware assets.

The stock still has a long way to go before shareholders at the spinoff date can start counting their profits. In the meantime, the stock looks incredibly affordable. Windstream sports a 10.3% return on equity but shares are trading at just 0.1 times trailing sales. Compare this to far larger sector rival AT&T (NYSE:T), and you'll find similar ROE figures but a price-to-sales valuation that runs more than 13 times higher. And I'm not just cherry-picking comparisons here -- smaller rival CenturyLink (NYSE:LUMN), for example, sits on a 1.0 P/S ratio even though its return of equity stops at just 6%.

This looks like a mismatch between share prices and shareholder value, even after a robust correction in February.