The company never recovered after news surfaced that its CFO had been replaced.

What: Units of Energy Transfer Equity (ET -1.97%) and its MLP, Energy Transfer Partners (NYSE: ETP), were hammered last month, after the market learned on February 8th that the general partner had replaced its CFO: 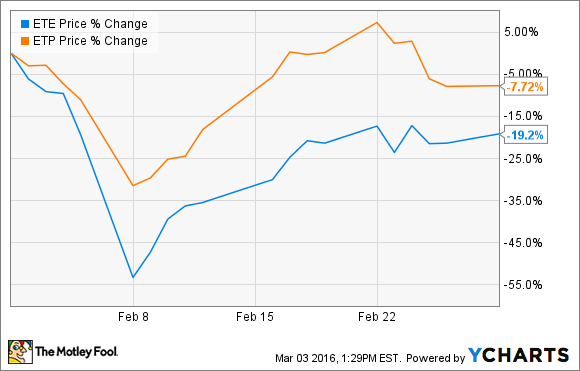 So what: Units of Energy Transfer Partners were eviscerated after it announced that it was replacing its CFO with the CFO of Energy Transfer Partners. While it said that the change was not caused by a disagreement over accounting or financial matters, the move spooked the market. In fact, it earned the company a swift downgrade from Baird, which cut it from outperform to neutral.

In time, however, investors realized that they overreacted a bit, leading to a recovery in the unit price of both companies. At least until the companies reported fourth-quarter results. Those results showed continued weakness in Energy Transfer Partners midstream business due to its exposure to commodity prices, as well as issues at some of its other segments, leading to a steep drop in segment earnings and a questionable distribution coverage ratio. That has investors worried that the company's distribution might not be on solid ground, despite the fact that management said that there's no chance of a distribution cut at either company.

Now what: Investors never like to see a CFO unexpectedly leave a company. That said, Energy Transfer Equity did say that it is having discussions on bringing its former CFO back as a consultant on its LNG project, which suggests that there is nothing amiss. The other big concern weighing on investors minds last month was the continued weakness at several of Energy Transfer Partners' business segments. Those struggles only added to concerns that distributions might not be sustainable during the downturn. So, until the company has the numbers to back up the sustainability of its distribution, investors will likely act under the assumption that it will be reduced. They've already seen enough "secure" dividends go by the wayside this year to remain very skeptical of Energy Transfer's payouts.