Barnes & Noble (NYSE:BKS) has long been overshadowed by Amazon (NASDAQ:AMZN) even though books are a relatively minor part of the online retailer's operation now.

But, in Barnes & Noble's universe, Amazon still looms large and rumors that the online retailer was planning to open hundreds of book stores in malls around the country sent the physical bookstore's stock sinking early in February. When those rumors turned out to be a misstatement by the person who made the news public, Barnes & Noble shares rebounded not only from the drop, but from where it started the month.

What: Call it the exhale effect, but when Sandeep Mathrani, chief executive of United States mall operator General Growth Properties backed off on claims that Amazon was going to open 300 to 400 bookstores shares in the chain bounced back from a Feb. 3 low close for the month of $7.33. The Mathrani story broke on Feb. 2 and his denial was widely reported two days later. The good news for the retailer it saw its stock jump from $8.77 to a Feb. 29 final price of $9.70, a 10.6%  gain according to data provided by S&P Global Market Intelligence. 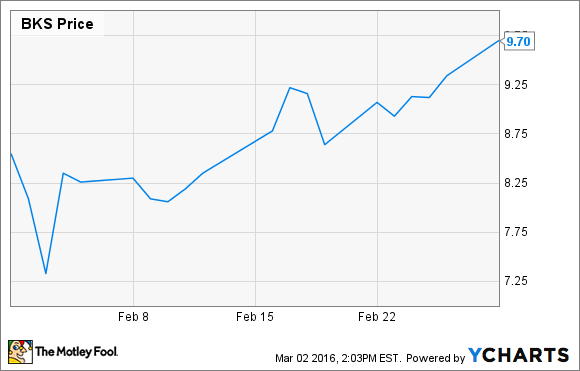 So what: Barnes & Noble operates with a perpetual sword over it head. Amazon dominates the digital book space and if it went into physical bookstores it would almost certainly put the country's leading physical book chain out of business.

By not announcing that it plans to open brick and mortar bookstores, Amazon essentially gives Barnes & Noble more time to continue its transformation into something more than just a bookseller. That's a fairly mild reprieve, but it's better than an immediate death sentence.

Now what: Barnes & Noble lives to fight another day but all its inherent problems remain. The company still operates enormous, expensive retail stores which sell mostly books. The chain has a failed digital strategy in NOOK, which cannot be saved, and it needs a major transformation if it hopes to continue as a brand.

Selling books is ultimately not enough and while Barnes & Noble has added toys and expanded into other areas a little bit, the chain needs to continue to add product niches which consumers prefer buying in person to digital shopping. That's a daunting, perhaps impossible, task, but at least Amazon's non-news gives the company more time to find a new direction.