The online retailer got a boost as excitement built for its blockchain investments.

What: Shares of online retailer Overstock.com (OSTK -4.02%) soared 23% last month, according to data from S&P Global Market Intelligence, jumping on its fourth-quarter earnings report. As you can see from the chart below, most of the stock's gains came on Feb. 10, following the release of the earnings report. 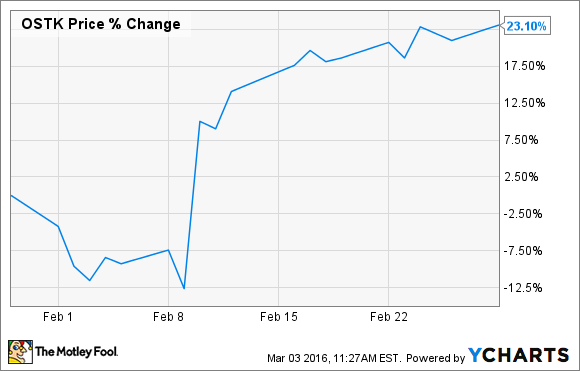 So what: For the fourth quarter, the retailer reported revenue of $480 million and net income of $110,000, or breakeven per share. No analyst estimates were available.

It was the fourth straight profitable year the closeout specialist reported, but while revenue increased 2% in the quarter, contribution profit from its retail segment fell by 4% to $47 million. Earnings per share was also down from $0.06 in the quarter a year ago, a deficit CEO Patrick Byrne blamed on the company's investments in blockchain, or the same technology used by Bitcoin.

What seemed to lift the stock was the CEO's comments about potentially separating its blockchain investment from the core retail business. CEO Patrick Byrne said, "I am exploring a possible synergy between these two wings of our business (retail and our capital markets innovation), but if it does not prove out they will be separated. Given our comfortable cash position, strong cash flow and consistent profitability, I would describe my approach to this as, brisk but not scrambling."

In December, Byrne announced that the SEC had granted him permission to issue stock through the blockchain.

Now what: Byrne's odyssey into blockchain seems to have attracted Bitcoin enthusiasts and other fans of the new technology, but Overstock's core businesses is still in disrepair. The stock has traded sideways since its inception more than 10 years ago, and has rarely done better than break even. Based on that history, it's hard to make a convincing case for the stock especially with Amazon.com happy to operate near breakeven as well. Some may see value in the blockchain operation, but that remains an unproven business model. The retail operations, meanwhile, continue to sag.