Find out just what this super-fast-growing energy dividend growth champion's secret is, and why 2015's hypergrowth is likely to continue in 2016, oil crash notwithstanding.

Not surprisingly, with few exceptions, the worst oil crash in 50 years has decimated energy company earnings. However, Shell Midstream Partners (SHLX) has bucked this trend, resulting in some of the best relative performance in the MLP industry. 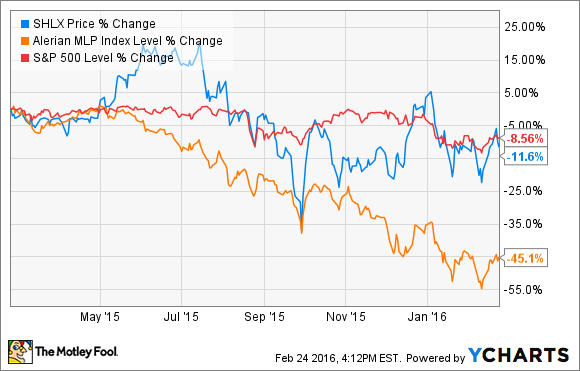 While this means that Shell Midstream is nowhere near as cheap as many of its peers, its latest earnings result reveals three reasons its premium valuation is well earned. More importantly, these factors are likely to continue into 2016 and beyond, potentially making this fast-growing midstream MLP one of the better dividend growth opportunities you can find today.

Growth engine firing on all cylinders

Note that Shell Midstream Partners IPO'd in late 2014 and does not have full-year 2014 results, so we'll have to go on a quarterly comparison for now.

Shell Midstream's sensational growth this quarter was due to the closing of two dropdowns from its sponsor and general partner, Royal Dutch Shell (RDS.A) (RDS.B). What's more impressive is that Shell Midstream, despite growing its distribution at one of the fastest rates in its industry, has so far been consistent in not just keeping its coverage ratio stable, but actually growing over time. However, past performance isn't a guarantee that future growth will be as impressive, especially with such a short track record to judge its recent growth.

On the other hand Shell Midstream does have three strong factors working in its favor that might cause its continued growth for many more years.

Payout profile among the best in its industry

The first thing every income investor should look at is the payout profile of any potential investment, which consists of yield, payout security, and long-term realistic payout growth potential.

Not only did Shell Midstream Partners generate a lot of excess cash flow in 2015 relative to the size of its payout ($51.5 million worth), but analysts also expect its impressive distribution growth to continue..

However, keep in mind that analyst long-term projects are educated estimates that always need to take with a grain of salt. That's especially true given that analysts are susceptible to recency bias, meaning they expect short-term trends to continue long into the future.

Investors always need to ask what the growth catalyst is that makes those projections reasonable. In the case of Shell Midstream Partners, it's the enormous growth runway provided by Royal Dutch Shell's enormous dropdown pipeline.

Growth potential is massive but... 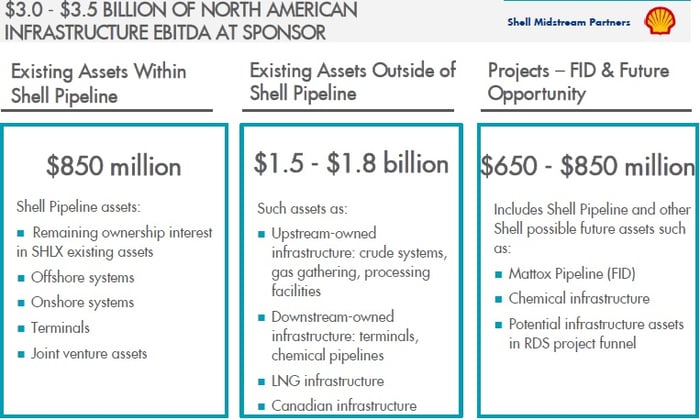 Royal Dutch Shell, because of its enormous scale, has a mountain of midstream assets it plans to eventually drop down to Shell Midstream Partners. In fact, the potentially $3.5 billion in annual EBITDA growth represented by Shell's North American assets alone would represent a potential increase of over 19-fold compared with the MLP's current levels.

Factor in Shell's global midstream assets, which probably represent potential future EBITDA growth several times larger than this, and you can see why Wall Street loves Shell Midstream and continues to allow it to command such a rich valuation.

However, just because a midstream MLP has massive growth potential doesn't mean it can necessarily execute on it. That's why the final thing dividend investors need to check is whether Shell Midstream has access to enough cheap growth capital to eventually acquire these assets, as well as be aware of the risks that threaten its amazing growth story.

...it's not without risks
While Shell Midstream's high and growing coverage ratio represents a potentially exponentially growing stream of excess cash flow that can fund some growth, the fact is that no investment is a "sure thing".

For example, until Shell Midstream Partners grows substantially larger, its excess cash flow simply won't be large enough to fund a significant portion of its capital spending. Luckily, the MLP's low leverage ratio (debt/EBITDA) of 2.37, one of the lowest in its industry, gives it a strong liquidity position of $703 million, 87% of which is in the form of revolving credit facilities.

In addition, investors need to keep in mind a few things. First, Shell Midstream Partners' is too new an MLP for us to yet know whether Royal Dutch Shell will prove a responsible and long-term focused sponsor. For instance, Shell could try to grow the MLP too quickly, loading up its balance sheet with too much debt -- which is always a double edged sword -- that could sour fickle investor confidence in its business model.

If its unit price were to collapse, as rival MPLX's recently did after that MLP took on a large amount of debt to merge with MarkWest Energy Partners, then Shell Midstream could find its access to cheap equity greatly diminished. That in turn might force management to cut its short-term growth outlook, potentially resulting in even further price weakness.

Bottom line
Shell Midstream Partners is one of the most expensive midstream MLPs in its industry. However, because of its enormous long-term growth potential, it could still make a great income growth investment.

With a massive dropdown pipeline from Shell that could potentially supply ongoing strong payout growth for as far as the eye can see, one of the strongest coverage ratios in the MLP industry, and, at least for now, large, easy access to cheap growth capital, I think Shell Midstream deserves to be on your radar.

That being said, the recent oil crash has shown that an MLP's growth prospects, and Wall Street optimism along with it, can change in a hurry. That's why long-term income growth investor's always need to remember to maintain a well diversified portfolio.

Adam Galas owns units in Shell Midstream Partners and MPLX. The Motley Fool has no position in any of the stocks mentioned. We Fools may not all hold the same opinions, but we all believe that considering a diverse range of insights makes us better investors. The Motley Fool has a disclosure policy.