On Thursday, July 23, 2015, ISIS killed a Turkish soldier in a firefight on the Turkish-Syrian border. One day later, Turkey launched its first airstrike on ISIS positions in Syria, officially joining the fight against ISIS.

Ever since, Turkish fighter jets have continued to bomb ISIS targets in Syria and Iraq. At the same time, Turkey is fighting a broader war against Kurdish separatists at home, and their allies in Iraqi Kurdistan. To help with that fight, and perhaps with the ISIS fight as well, they're coming to the U.S. seeking high-tech munitions to drop on deeply dug-in targets.

Wondering why any of this should interest U.S. investors?

Here's why: New bombs cost money. Bombs dropped -- whatever the target -- must eventually be replaced. And none of these bombs come cheap.

Cui bono?
Last week, in the U.S. Department of Defense's daily digest of contracts awarded to its suppliers, the Pentagon detailed its first  award of a military sales contract to Turkey for BLU-109 "bunker-buster" bombs for its fight against the Kurds.

The contract in question, worth $682.9 million over five years, calls on privately held Ellwood National Forge of Irvine, Pennsylvania, along with publicly traded General Dynamics (GD -1.15%), to supply an unspecified number of bombs to the Turks.

Ellwood, according to information from financial data website S&P Global Market Intelligence, is primarily a steelmaker and metal machiner. Presumably, it will be responsible for producing the bomb casings, with General Dynamics being responsible for the explosive parts.

Not mentioned in the contract award was who, if anyone, would produce laser-guidance kits to convert the BLU-109s into a smart bomb configuration. In a similar arms sale to Israel reported last year,  Raytheon (RTN) was tapped to supply Paveway guidance kits for this purpose.

According to a Turkish military official quoted in Defense News, they "need smart bombs" in particular to ensure their new bombs hit their targets. This suggests that additional contracts could be coming out of Turkey soon -- either that, or General Dynamics will be subcontracting part of its work out to Raytheon to do the "smart" part of its bomb-making.

The big picture
The Turkish bomb contract is a pretty big deal for General Dynamics, but it's far from the only defense industry contract coming out of the Middle East these days, though more of the others are in support of the air war against ISIS. In months past, we've seen multiple similar contracts -- of even bigger size -- awarded to General Dynamics and its peers to supply bombs to Israel to Iraq, to Saudi Arabia, and of course to the U.S. Air Force.

So long as the war against ISIS continues to roll on, profits from bomb sales should continue rolling in for General Dynamics. 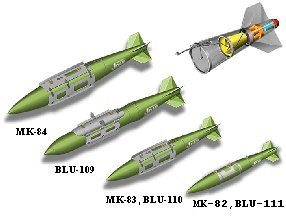 THE BLU-109 bunker-buster IS ONE OF THE BIGGER BOMBS THAT CAN BE MADE "SMART." Image source: U.S. Air Force via WIKIMEDIA COMMONS.

Rich Smith owns shares of Raytheon Company. You can find him on Motley Fool CAPS, publicly pontificating under the handle TMFDitty, where he's currently ranked No. 270 out of more than 75,000 rated members. Follow him on Facebook for the latest in defense news.