The fourth quarter of 2015 wasn't the legendary investor's most active ever, but he did make some significant moves.

In its latest regulatory filing, Warren Buffett's Berkshire Hathaway (BRK.A 3.75%) (BRK.B 4.02%) didn't report too many big surprises, but there were a few notable moves. Specifically, it appears that Buffett is betting on a rebound in energy and commodity prices, and is harvesting some of his gains elsewhere. With that in mind, here's what Warren Buffett has been buying and selling, and what you can learn from it.

The only new stake in the fourth quarter
The only brand-new stock holding in Berkshire's portfolio is Kinder Morgan (KMI 1.48%), of which Berkshire acquired 26.5 million shares with a market value of roughly $395 million as of this writing. This isn't a big investment by Buffett standards, but could pay off nicely if the oil and gas markets turn around.

My Foolish colleague Matthew DiLallo wrote an excellent piece about the possible reasons why Buffett was attracted to Kinder Morgan, and here's a summary: 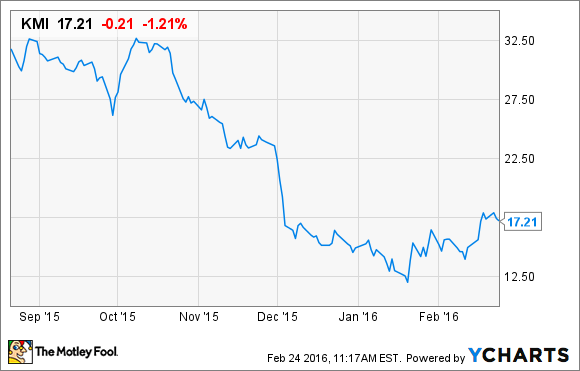 A massive energy bet
Berkshire has been aggressively adding to its stake in Phillips 66 (PSX -0.23%) in recent months. As of the latest filings, Berkshire has spent nearly $1.1 billion on the oil refiner so far in 2016, bringing its stake to about $6 billion, or 14.2% of the company.

Phillips 66 is an excellent dividend-growth play, and is attractive right now for a few reasons. First, the company's refining and marketing operations actually benefit from low oil prices. At a time when most oil companies see their earnings (and stock prices) plummeting, the opposite is true of Phillips 66. 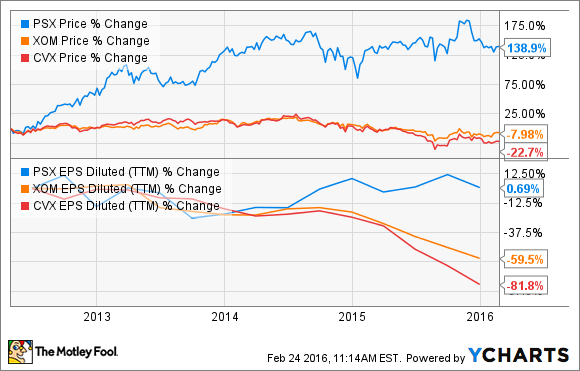 Plus, Phillips 66 has a history of shareholder-friendly management which I'm sure Buffett loves. The company has been rather generous in recent years in terms of returning capital to shareholders, both as dividends and share repurchases. The quarterly dividend has grown from $0.20 to $0.56 since 2012, and the outstanding share count has dropped by more than 15% during the same time period. 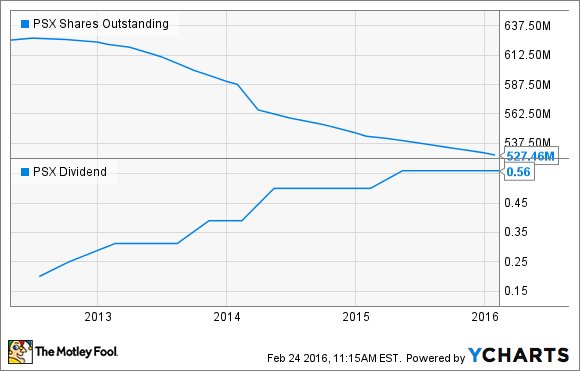 Adding to his favorite bank
Berkshire holds a massive position in Wells Fargo (NYSE: WFC) -- a 9.2% stake in the bank worth more than $22.4 billion as of this writing. And, Berkshire's Wells Fargo share count grew by about 2% during the fourth quarter, presumably to take advantage of depressed bank valuations.

It's easy to see why Buffett likes Wells Fargo. The bank has a history of smart risk management and efficient operations, which not only allowed it to survive the financial crisis, but to take advantage of weaker rivals and strengthen its position. Specifically, the bank's acquisition of Wachovia for a fraction of its pre-crisis value allowed it to catapult to the No. 1 U.S. bank by market cap.

Since then, Wells Fargo has maintained its status as the most efficient and profitable of the big four banks, as you can see in this chart. 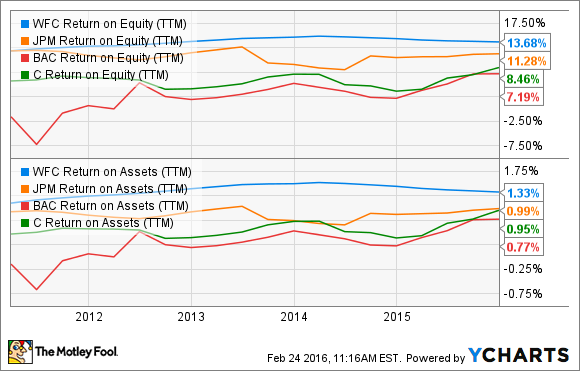 As I've written in detail before, Wells Fargo is Warren Buffett's favorite bank stock, and for good reason.

Other notable buys and sells

Buffett's AT&T stake declined by about 20% during the fourth quarter. However, it's important for investors to understand that this stake was not purchased directly -- rather, these shares were the result of AT&T's merger with DIRECTV, which closed in July 2015. Berkshire's original DIRECTV investment has roughly doubled in value since it was initiated in 2011, so the reduction of the AT&T stake could simply be Berkshire collecting some of its profits in order to raise capital for other opportunities.

Berkshire's stake in Deere & Co. increased by about 5.7 million shares, and now represents a 7.2% stake in the company. Deere's share price has taken a hit recently, thanks to weak commodity prices, but the company's business isn't going anywhere. I recently wrote an article where I discussed Buffett's purchase of a small farm in the 1980s. Some of his reasons for doing so also apply to his investment in Deere -- to name a couple, the farming business will always be around, and the valuation is right. Plus, Deere's strong cash flow and rock-solid brand name give it a strong competitive advantage, especially during the tough times.

The bottom line on these Buffett moves
While Buffett seems to be betting on an energy rebound, these stocks all fit into Buffett's familiar criteria. They all have strong cash flow and their current valuations give Buffett a nice margin of safety, which he loves. These are all examples of Buffett's favorite way to invest -- by buying great companies at fair prices.

Finally, just because Buffett bought or sold a stock doesn't mean you should do the same. Rather, my point is that there are some good lessons you can learn from the stocks he picks, including the companies discussed here.