Please ensure Javascript is enabled for purposes of website accessibility
Log In Help Join The Motley Fool
Free Article Join Over 1 Million Premium Members And Get More In-Depth Stock Guidance and Research
By Evan Niu, CFA - Mar 6, 2016 at 11:00AM

When we're talking about a secular transition that could easily take 50 years or more, you better be willing to wait.

Patience is a virtue, and Tesla Motors (TSLA 7.33%) investors (myself included) have an awful lot of it. How else can you explain that shareholders are willing to endure mind-boggling cash burn, skyrocketing expenses, and a fourth-quarter net loss that came in far worse than anyone could have imagined?

It's this history of American automakers that people sometimes lose sight of. In today's market, investors look through a lens of relatively short timelines. Virtually all metrics that guide investing decisions are based on 12-month figures, and most of the rest are oversimplified projections such as terminal growth rates. Sometimes you need a longer view.

But it's also this historical perspective that really explains why investors have so much patience with Tesla. Shareholders recognize that it's not easy to build a car company from scratch, given the incredible capital intensity of manufacturing vehicles at scale. There are only a handful of industries that are more capital intense, one of which being the aerospace and rocket industry.

A trip down memory lane
Consider Ford's aforementioned IPO. When Ford went public, it was on the tail end of a "decade of growth" from 1946 to 1955. The preceding year had generated revenue of $5.6 billion and net income of $437 million, according to Ford's first annual report as a public company. That was quite an improvement from the $8 million net loss that Ford posted in 1946.

In order to fund this period of growth and manufacturing expansion, Ford spent a total of $1.68 billion throughout the decade in order to modernize and expand its factories for increased production. Those are 1956 dollars. Adjusting for inflation, that translates into $14.6 billion of 2016 dollars. For that grand sum, Ford built up 15 manufacturing plants, 10 assembly plants, 20 parts depots, and eight engineering facilities. Additionally, 23 existing plants were expanded or modernized.

On top of that, Ford planned on spending an additional $1 billion ($8.7 billion in 2016 dollars) over the following 2.5 years for continued expansion. That would cover the bill for nine new manufacturing plants, two new assembly plants, and nine engineering facilities.

So yeah, it's pretty expensive to grow a car company. It's worth noting that at that point in history, Ford was fairly mature and had been around for over 50 years, and it was still that expensive to fund growth and increase production. 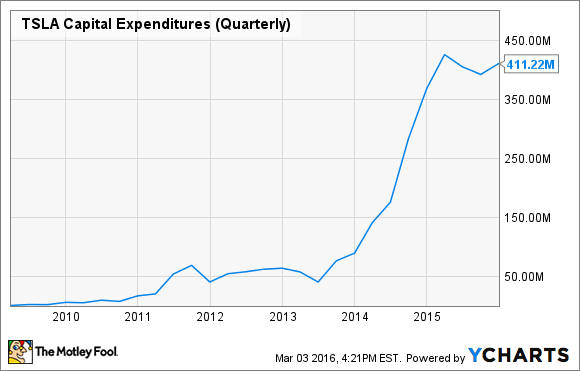 This is the part that's sometimes lost in the history books, but fortunately the market understands these capital requirements and is willing to give Tesla more time to fund growth. And Tesla is only just beginning to ramp up capital spending and manufacturing volumes.

One of a kind
It's for this reason why I'd argue that Tesla has no directly comparable peers. The time lag between Tesla and its traditional rivals is far too great to yield any meaningful comparisons. Few other industries have this magnitude of time lag among peers.

Think about book value, which has been built up and depreciated for a century in some cases for incumbents. Incumbent automakers have a lot of manufacturing capacity in place, investing in tooling and equipment for just as long. Book value is very much an accounting metric that fundamentally has a lot of long-standing history built into it. How can you compare Tesla's to Ford's? You can't. It's just not a relevant or meaningful comparison, and there are other examples.

Tesla bears like Bob Lutz might cite that Tesla loses $4,000 per vehicle (a figure that was floated last summer). But simply dividing Tesla's adjusted operating loss by total vehicles delivered oversimplifies the picture, specifically because it is so incredibly expensive to design, develop, and manufacture vehicles (and those costs are included in operating expenses). Development alone can easily cost upwards of $1 billion, before manufacturing even comes into play.

Simply put, there's no real way to compare a 91-year-old automaker (the youngest of the Big Three) to a 13-year-old one. The only similarity is that they all make cars.

The EV revolution will take decades
It's not as if Tesla investors are just sitting idly by, either. Quite the contrary. Investors are happy to help raise even more capital to help with the growing pains. As recently as last August, Tesla had a secondary offering in order to raise cash to fund ongoing capital expenditures. Stocks typically fall when secondary offerings are announced due to dilution concerns, but Tesla shares jumped because the dilution was minimal (a function of the lofty share price) and the offering would bolster the company's cash position and subsequently help fund future growth. 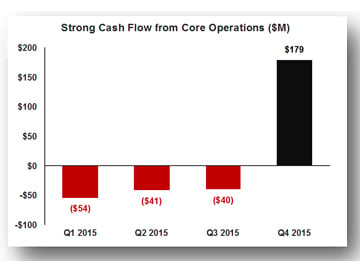 The two most important operating metrics for Tesla as a young automaker are vehicle deliveries and cash flow. Deliveries continue to march higher, despite Tesla's best efforts to suppress demand so it can fulfill its backlog of Model X orders (currently around 30,000), and new CFO Jason Wheeler was explicitly instructed by Elon Musk to prioritize cash flow above all else. Tesla put up a strong increase in core operating cash flow last quarter (which adjusts for lease accounting related to Tesla's resale value guarantee).

To be clear, if Tesla begins to falter in these areas, investor patience might quickly evaporate. But when you're talking about a secular transition to electric vehicles that could easily take 50 years, if not longer, having some patience is par for the course.