Chipotle Mexican Grill (NYSE:CMG) and Panera Bread (NASDAQ:PNRA) are Foolish favorites that have beaten the S&P 500 over the past five years and are far from finished. Both have market-beating potential over the next five to 10 years, but which one is a better buy today? 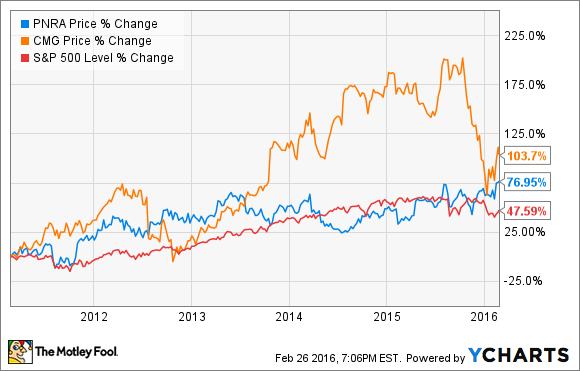 Growth
Both businesses have been great growth stories, but by nearly any metric Chipotle wins this category. Its five-year average revenue growth rate is 19.65%, compared with 11.7% for Panera. It's been more successful at growing the bottom line as well. Over the same period, average annual net income and earnings per share growth were 21.59% and 21.77%, respectively, compared with 5.95% and 9.85% for Panera.

Both companies have done a good job growing their businesses while reducing their share count. Chipotle has hovered in the range of 31 million to 32 million shares outstanding for the past five years, while Panera has actually managed to reduce its total share count from 31 million in 2010 to 26 million in 2015. Chipotle's EPS growth is even more impressive in this context. It has managed 21.77% average growth over the past half-decade almost entirely from earnings growth, while a fair amount of Panera's EPS growth has come from buybacks.

Valuation
Growth is only one part of the equation when assessing an investment opportunity. Knowing nothing else, a business growing net income at 30% annually with a P/E of 50 is a less desirable investment than one growing at 10% annually with a P/E of 15. This is reflected in the PEG ratio (P/E to growth), where the lower the number, the better. Chipotle's superior growth rates have historically led to its having a significantly higher P/E ratio than Panera. Over the past five years, Chipotle's average 46.8 P/E ratio has dwarfed Panera's 28.2 P/E.

Recently the two P/E ratios have begun to converge. Chipotle's stock has tumbled around 25% over the last year, while Panera's is up around 30%. As a result, the trailing P/E ratio for Panera has risen to 35, while Chipotle's has dropped to 33.5. At first glance it seems Chipotle is a more compelling choice -- getting a great growth stock for a lower multiple -- but it's not this straightforward.

Chipotle's stock price has dropped for a reason. Concerns about E. coli and other viral outbreaks have kept lines short, which will be reflected in weaker 2016 earnings. Its forward P/E is 35.7, compared with 27 for Panera. Next year should bring earnings growth for my favorite burrito slinger, but 2016 will be rocky, and the current P/E ratio isn't the short-term slam dunk that it appears to be. Purely on a valuation basis, Panera gets the nod.

Risks
Chipotle is going through its darkest chapter, which is reflected in its share price, valuation, and forward earnings forecast. A restaurant company is bound to have health issues at some point during its history if it's around long enough, and Chipotle is making efforts to ensure that an outbreak never happens again. If I had to bet on another outbreak at Chipotle or a different fast-casual chain that hasn't had any problems, I would choose the latter.

Panera went through a rough patch a few years ago, where CEO Ron Shaich described the "mosh-pit-like" feel inside one of its cafes. Management invested money and time to rework the stores, increase the use of technology, and improve the overall customer experience. This project, dubbed Panera 2.0, is starting to positively affect the company's bottom line and seems to be contributing to Panera's stock trading at all-time highs today.

It's generally better to invest when things look bleak than when they look rosy. Warren Buffett has said that investors "pay a high price for a cheery consensus." Motley Fool co-founder David Gardner looks for "dark clouds we can see though" when searching for investment opportunities. In 2011, when Panera stock dropped to nearly $100 a share, dark clouds were swirling around the company. An investment then would have led to a double in less than five years if you could have seen that management had a plan to turn things around.

I still like Panera but think that the "dark cloud" opportunity is with Chipotle. People may stay away from its stores, but I doubt it. Being able to grab Chipotle's growth, which could eventually include a more robust international rollout, ShopHouse, and Pizzeria Locale, at a P/E in the mid 30s is too good to pass up. This will be a rough year, but for the next five, 10, and 20 years, long-term investors will be richly rewarded with a Chipotle buy today.