Satya Nadella has been on a spending spree.

At a time when Silicon Valley start-up valuations are starting to cool, the major tech giants are going on a shopping spree. Private company tracker CB Insights recently outlined some M&A trends over the past few years, and Microsoft (MSFT 1.99%) has seen the biggest strategic shift in its acquisition strategy under CEO Satya Nadella. The software giant scooped up 18 companies last year, according to the data. 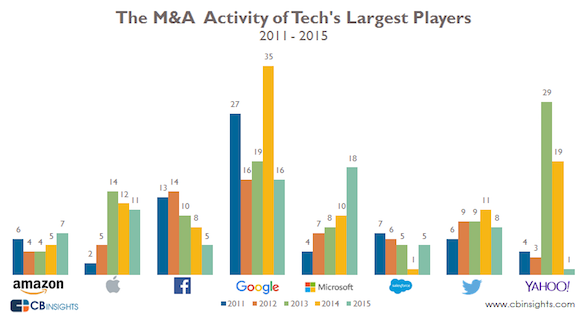 That's more than any of its peers, including Apple (AAPL 0.79%) and Alphabet.

When Redmond outspends Silicon Valley
Apple acquired 11 companies in 2015, while Alphabet purchased 16. Alphabet has always been rather acquisitive in its never-ending quest for moonshots, and Apple has also ramped up its acquisition activity under Tim Cook.

But Nadella is making the most notable push with acquisitions. This might be because he's keenly aware of Microsoft's relatively weak position in certain markets like mobile, and it's a faster way to strengthen the company's inroads when it doesn't make the operating system or the device. Among the more notable mobile-related acquisitions were apps like Acompli (since rebranded as the new mobile Outlook), Sunrise, Wunderlist, and SwiftKey, among many others. (Microsoft provides its acquisition history here, so feel free to peruse for yourself.)

Apple appears ready to increase its own rate of acquisitions, even as the Mac maker has been acqui-hiring talent predominantly in virtual/augmented reality over the past year. In a recent interview with Fortune, Cook said that Apple usually acquires a company every three to four weeks on average. That translates into 13 to 17 acquisitions per year. That's slightly more than CB Insight's data suggests, but it's also possible that Apple was able to quietly make some purchases that no one caught wind of (even if that's rare these days).

Some unicorns have lost their horns
While the public markets have been pulling back so far this year, 2015 was kind of a tough year for start-up valuations. You've probably heard all the talk about "unicorns" and how some of them have fallen from grace. CB Insights also separately tracks downrounds, which are funding rounds where the private company earns a lower valuation than the prior round. This also include if the company was acquired or goes public (such as Square) for a lower valuation than the prior private valuation. There have been 56 downrounds since 2015.

Fluctuations in private valuations have some important impacts. First off, employees can get burned very badly if they've been compensated with pricey private stock, pay a hefty tax bill based on lofty prices, and then their company gets acquired for a substantially lower valuation. That's what happened to former unicorn Good Technology, when BlackBerry purchased it for $425 million. Good Technology had previously earned a $1.1 billion valuation.

But those lower valuations can present an opportunity for larger would-be acquirers. For instance, Cook noted that asset prices have been declining across the board, but Apple always continues to invest in innovation even during downturns, since you can get more bang for your buck. He added, "Some of our greatest innovations and products were born in a period of challenge."

As far as Microsoft is concerned, shares have soared under Nadella as investors buy in to his vision, which just so happens to include a lot of acquisitions.

Microsoft's CEO Elaborates on Investing in ChatGPT and Artificial Intelligence