Image by TBIT via pixabay

What: Investors in Adamas Pharmaceuticals (ADMS), a small cap drug maker focused on treatments for diseases of the central nervous system, had a February to forget as the company's stock lost 25.3% of its value during the month, according to data from S&P Global Market Intelligence.

So what: Adamas Pharmaceuticals reported its fourth quarter earnings in February and the top line results looked good enough. Net loss for the quarter came in at $10.7 million, or $0.58 per share, and was much lower than the $0.94 loss that Wall Street was expecting.

In the earnings release Adamas Pharmaceutical's CEO Gregory Went confirmed that the company is on track to submit a New Drug Application for its lead compound ADS-5102 as a potential treatment for levodopa-induced dyskinesia associated with Parkinson's disease in the next few months.

The company also looks to be well capitalized as it ended the year with $120 million in cash on its balance sheet and it raised another $61.8 million in a follow-on public offering in January.

Despite Adamas showing a lower than expected loss for the period an analyst from TheStreet lowered their rating of the company's stock and moved it from "hold" to "sell." That downgrade put a lot of selling pressure on the company's shares after it was released and looks to be one of the primary reasons that the stock sold-off so much during the month.

Now what: February proved to be a rough month for many small-cap biopharma stocks. Intra-Cellular Therapies (ITCI 1.13%), another clinical stage biopharma that focuses on the central nervous system, also saw its shares plunge by more than 22% during the period. 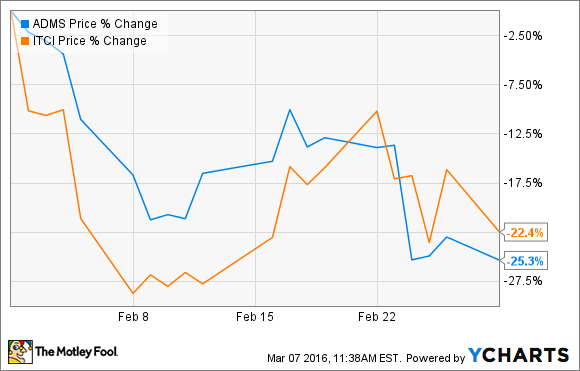 Like Adamas, Intra-Cellular Therapies also reported its fourth-quarter earnings during the month and was able to beat expectations by showing a lower than expected loss, but that wasn't enough to keep the company's stock from dropping.

Regardless of these short-term price movements the only thing that matters over the long term is whether or not these companies will be able to navigate their products through the regulatory approval process. Investors didn't get any news on this front during the month so its likely that the companies saw their share price drop simply because of market noise.

If you were bullish on Adamas Pharmaceuticals' prospects before the month began then I see no reason to change your stance now.

Why Adamas Pharmaceuticals, Inc. Stock Continued to Slide in November
356%