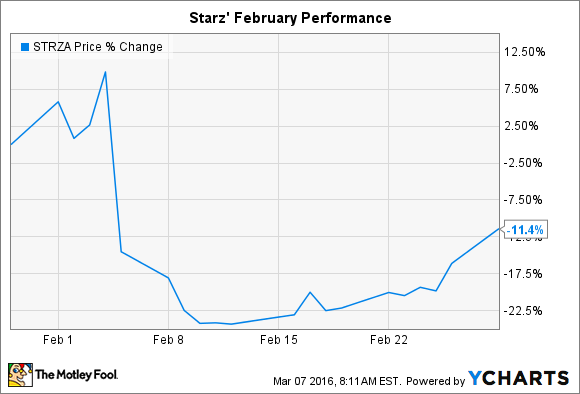 The decline has helped push shares lower by 16% so far in 2016, and down by roughly the same margin over the last year.

So what: February's drop coincided with the release of surprisingly weak Q4 earnings results from Lions Gate (LGF-A -0.90%). The content producer behind shows like Orange is the New Black and hit movie franchises including Hunger Games, saw its stock plummet by 30% on the day following that earnings release, which revealed a weaker-than-expected performance from the film Hunger Games: Mockingjay, Part 2.

That matters to Starz shareholders because the two media companies are reported to be in talks on a potential merger deal, and sharply weaker results from Lions Gate could derail such a tie-up or lower the eventual purchase price of any deal.

Now what: Later in the month, Starz posted its own fourth-quarter results, and they were marked by a 65% earnings decline on a minor uptick in network subscribers.

The profit drop wasn't a surprise, though; it's a direct result of management's strategic push to bulk up the original content portfolio. Executives are succeeding on that front, as Starz now controls 76 exclusive shows.

The original content push will likely continue hurting profits in the years ahead, but the company expects subscriber growth to follow as it gives users stronger incentives to become steady members so they can follow hits like Ash vs. Evil Dead and Black Sails.

At the same time, Starz is engaged in expanding its service availability outside of the traditional TV ecosystem. It recently partnered with Amazon.com to put its network on the Prime Video service as an add-on subscription. Starz's tech team is also putting the finishing touches on a stand-alone app that promises to bring the channel to many more devices, including video game systems and smart TVs.

Demitrios Kalogeropoulos has no position in any stocks mentioned. The Motley Fool owns shares of and recommends Amazon.com and Lions Gate Entertainment. The Motley Fool recommends Starz. We Fools may not all hold the same opinions, but we all believe that considering a diverse range of insights makes us better investors. The Motley Fool has a disclosure policy.

Why Lionsgate Entertainment and Starz Soared This Morning
376%