While the broad market dipped and rebounded -- mostly -- this year, Opko Health (OPK -2.32%) stock has been on a virtual roller-coaster ride. In early February, shares of the diagnostics and pharmaceutical company fell more than 20% from the beginning of the year. 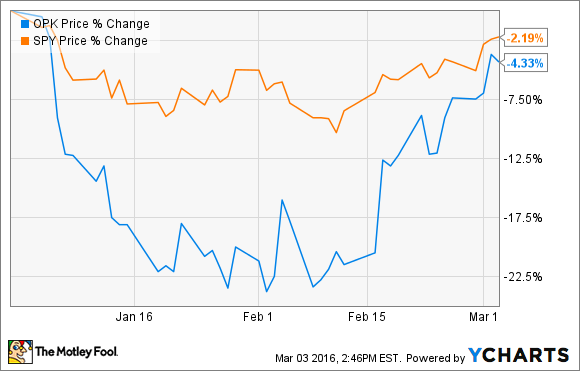 Although Opko has yet to produce an annual profit, recent acquisitions have sent revenue rocketing upward over the past five years, from just $28 million in 2011 to over $491 million last year. Here are three reasons the stock could rise as well.

1. A great deal
Part of the recent jump in Opko's revenue was an upfront payment from Pfizer (PFE 2.92%) for an exclusive license to commercialize the long-lasting human growth hormone hGH-CTP. Daily human growth hormone injections are nothing new, but Opko's carboxyl terminal peptide technology -- the "CTP" in hGH-CTP -- should allow for a once-weekly injection. That's a convenience pediatric caregivers will certainly appreciate.

Normally I would advise caution when not-yet-profitable companies tout "innovative platform technologies" that extend or increase the therapeutic value of existing drugs. In this case, though, I'm inclined to believe Opko has something of value. Pfizer's willingness to pay more upfront than on the back end -- $295 million, compared with $275 million in regulatory milestones -- is a significant endorsement of CTP's commercial potential.

The current market for human growth hormone is estimated at around $3 billion now, and it's expected to reach around $4 billion by 2018. Pfizer already has at least a 20% share with its Genotropin, although it's been losing ground to generic competition, with annual sales falling 15% last year to $617 million. With a differentiated product that reduces injection frequency, Pfizer should be able to maintain its share of this growing market.

Because Pfizer's agreed to pay for commercialization, manufacturing, and post-approval studies, practically all royalties received will filter down to pre-tax profit for Opko.

Of course, the drug needs to win approval first. We'll have a better idea of how likely this is when the company announces results of a phase 3 trial in adults in the second half of the year.

2. A pretty good deal
Back in 2010, Opko acquired rolapitant from Merck & Co.  and then a few years later licensed it out to Tesaro (NASDAQ: TSRO), which began U.S. sales of the post-chemo-anti-vomit agent last November.

Dubbed Varubi, this is Tesaro's first commercial-stage product. It's also the first drug I've heard of first marketed as a pill that will probably perform better as an intravenous infusion. You see, practitioners typically administer a combination of anti-nausea and vomiting drugs through an IV just ahead of the chemotherapy. Varubi is indicated for use in combination with these drugs, and a tablet is just plain confusing.

Why Tesaro won approval for the pill form ahead of the intravenous infusion is complicated. What you need to look out for is approval of Varubi's IV formulation. Tesaro should submit an application to the FDA any day now. If it's approved, the company plans to launch the drug in early 2017.

In the fourth quarter, Tesaro shipped 6,170 units at a wholesale cost of $530 each, which doesn't put a great deal in Opko's pocket. However, each year about 650,000 U.S. patients receive chemotherapy. This is why Opko investors will want to look out for potential approval of the intravenous formulation and steady growth of a drug that could add to the company's bottom line for years to come.

Chemo-induced nausea and vomiting comes in four different categories, one of which is underserved. Currently, Virubi in combination with other drugs is one of is one of two options for these patients. A third, named Sustol, from Heron Therapeutics, is awaiting a decision that the FDA has pushed back more than once. Shares of Tesaro and Opko could benefit if Heron's candidate is rejected.

3. What's your prostate score?
Last June, Opko Health took a lot of heat when it announced a $1.47 billion acquisition of Bio-Reference Laboratories, a company that reported a book value of just $336 million and profits of $10.4 million in the quarter ended April 2015. 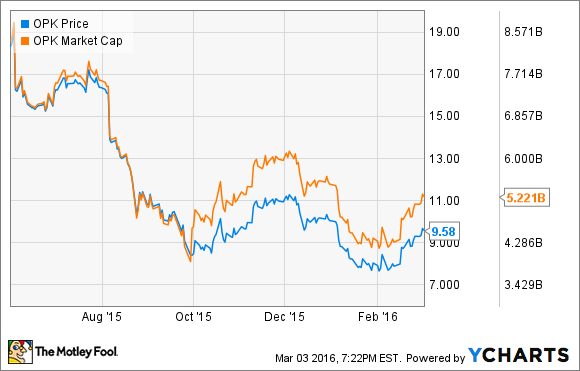 Now that Opko's market cap has shrunk more than $3 billion since the week ahead of the acquisition announcement, investors considering initiating a long position in Opko can enjoy all the "synergistic benefits" of the acquisition without paying for them.

Ahead of the deal, Opko had spent a little over a year trying to sell its prostate-specific antigen blood test, the 4Kscore, with limited success. The goal of the 4Kscore is to give a more accurate prediction of high-grade prostate cancer. With a price of $395 per test, the 4KScore isn't cheap, but neither are unnecessary prostate biopsies.

The diagnostic business is extremely difficult to break into, no matter what kind of value proposition your product may present. With the acquisition of Bio-Reference Laboratories, Opko leapfrogged into the oncology testing big leagues. To date, service revenue from the 4Kscore hasn't been significant enough to report. If the BRL-acquired connections can secure reimbursement and make it a standard of care for assessing prostate cancer risk, it could lead to enormous long-term gains.