From emerging markets to exchange rates and outspoken billionaires, these factors have the potential to push Mondelez to new heights.

In this article, I look at three reasons Mondelez's stock price could rise. This is not a declaration that any of these things will happen, nor that the stock price will increase. I'm just examining the merits of a bull argument thesis. 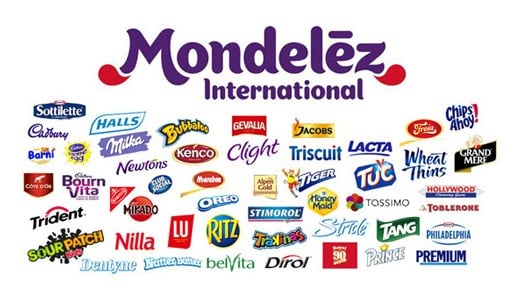 1. Consumers in developing markets crave chocolate and other Western treats
Large numbers of people in emerging markets such as Brazil, Russia, India, China, and Mexico are increasingly moving into the middle class. Their growing incomes are driving them to buy foods and beverages that they couldn't previously afford, such as chocolate.

Mondelez has benefited from this trend due to its significant and fast-growing presence in emerging markets. In 2015, these regions accounted for about 39% of the top line, and their importance is best illustrated by these facts:

That's a common pattern -- the collective growth rates for many categories of foods and snacks are much higher in developing countries than in the developed world. If consumers in emerging markets continue their love affair with chocolate and other snacks, and if Mondelez is successful at increasing its market share in these regions, the company's stock price should rise.

2. Currency headwinds could subside -- or become tailwinds
In 2014 and 2015, the U.S. dollar gained considerable strength against the euro and other currencies, as this chart shows: 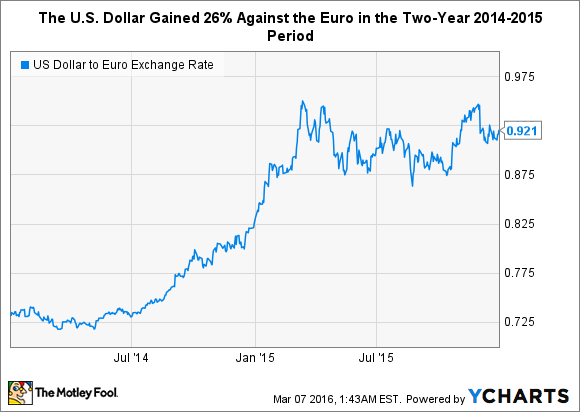 The relative strength of the dollar hurt the reported revenue growth of U.S. companies that do a significant amount of international business, and that currency impact flows down to the bottom line. Mondelez earnings were particularly hard hit, as it generated 76% of its business abroad in 2015, with Europe being its largest market. Companies such as Hershey and Smucker haven't faced nearly the same degree of currency headwinds. Hershey primarily does business in North America, though it has a small emerging markets business. Smucker also sells the vast majority of its goods in the U.S. and Canada.

In 2016, however, the euro has rebounded and gained a little ground on the U.S. dollar: 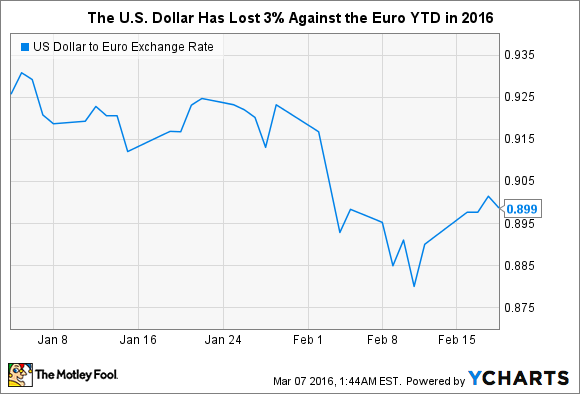 Though we're only two months into 2016, it appears that the gale-force currency headwinds that Mondelez has faced in the last two years might at last be subsiding. If this proves to be the case, the company's reported year-over-year revenue growth will get a boost that should carry through to the bottom line, bringing share price gains along with it.

We can't know for sure what Ackman plans, but it's likely that additional cost-cutting efforts top the list. Mondelez, like many traditional snack food makers, has been struggling to grow its revenue, in part because consumers in the developed world are increasingly turning to fresh and less-processed foods -- cost-cutting has become the tool of choice to grow earnings.

There have also been many rumors that Ackman is trying to force a sale of the company to Kraft Heinz, or even Pepsi. Backed by 3G Capital and Berkshire Hathaway, Heinz recently merged with Kraft Foods, so the company is unlikely to tackle another major acquisition. The irony here is that Mondelez was formerly Kraft Foods' global snack business before it spun off the North American grocery segment in 2012 and renamed itself.

If Ackman's goal is successful, Mondelez's share price will rise. That said, investors shouldn't buy any stock solely on the hope that it will be bought out, in my opinion.