The future of Annaly is in the hand a few key executives. Here's what they had to say during the company's fourth-quarter conference call.

Annaly Capital Management (NLY 1.97%) had its fourth-quarter conference call last Thursday. The company dug into everything from the global economy and interest rates to the company's shifting investment strategy. Here's what executives want you to know.

1. The Federal Reserve will keep rates low
The U.S. economy received an encouraging sign this past December when the Federal Reserve saw enough strength in the economy to begin raising short-term interest rates. The plan is to continue increasing rates in 2016 -- but mortgage REIT executives aren't buying it.

Annaly's CIO, David Finkelstein, said that "overseas economic developments have led to erosion in commodity prices [...] and widespread deterioration in equity and credit markets across the globe." The combination is leading Annaly's executives to believe that the Federal Reserve will abandon its mission to raise rates in the near term. This seems to be the majority opinion among mREITs, as similar statements came from American Capital Agency (AGNC 1.13%), CYS Investments (NYSE: CYS), and several others.

This could be good news for Annaly and its peers. These companies borrow based on short-term interest rates, and the Fed's initial increase in rates did modestly raise Annaly's cost of funds. If Annaly is correct, and the Fed decides to keep rates low, it should keep the company's borrowing costs down.

2. Annaly will continue to be conservative
The threat of rising rates has forced Annaly to play defense, but if executives believe rates will stay low, it could create an opportunity to get more aggressive. Finkelstein quickly squashed that notion by saying, "We're very cautious with respect to rates." He added that rates could still increase, and Annaly will continue "playing it down the middle."

Annaly's lower debt-to-equity ratio, or leverage, is a good example of this approach. Here's why: The vast majority of the company's securities lose market value when prevailing rates rise and appreciate in value when interest rates fall. The use of leverage, or funding a greater percentage of assets with debt, magnifies this dynamic. Annaly's decision to use less leverage is a sign the company is willing to sacrifice potential gains to better insulate itself from rising interest rates. 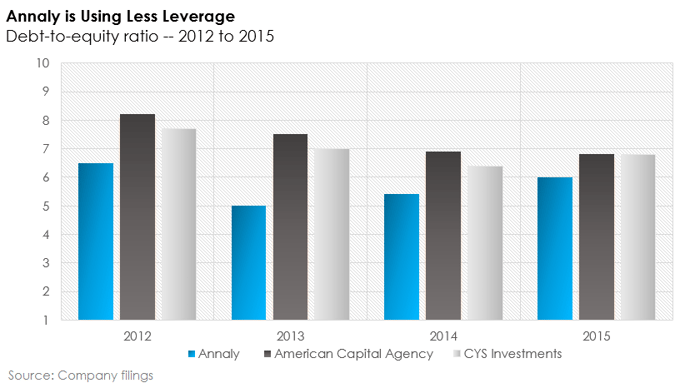 The difference in leverage between Annaly and its peers looks small, but if Annaly levered its $12 billion in total equity by 6.8 -- which is the same as American Capital Agency at the end of 2015 -- rather than where it stands today at just 6, Annaly would add $9.6 billion of debt. That would add a substantial amount of risk, and based on the current environment, where interest rates are expected to stay low, but will enviably rise, I think investors should appreciate Annaly's more defensive mind-set. However, not everything Annaly is doing is conservative.

3. Annaly will continue adding credit assets
One of the reasons Annaly is able to use less leverage is the company's continuing shift toward credit-sensitive investments. The goal of leverage is to ratchet up the return on investments, but things like commercial debt and equity as well as various residential credit investments already carry a higher yield. The trade-off is that the "credit" aspect of these investment means they're exposed to the risk of default.

This is a change of pace for Annaly. Like American Capital Agency and CYS Investments, Annaly has historically focused exclusively on agency residential mortgage-backed securities, or agency MBSes. These are pools of housing debt packed into fixed-income securities and stamped with a guarantee against default by Fannie Mae or Freddie Mac. The safety of these assets is a major reason for Annaly's durability over time. However, in an effort to find new opportunity, Annaly has made the move into credit.

Annaly grew its credit portfolio to 23% of equity during the fourth quarter -- or $3 billion worth of capital -- compared with 11% at the end of 2014. Annaly's CEO, Kevin Keyes, said that agency MBSes will remain the company's core focus but that the company expects to continue to add credit investments in 2016.

Big picture
The current state and direction of interest rates will always be important to Annaly's business, but the more interesting story to follow will be the transition from a company that invests in securities to one that can create assets. Annaly has $12 billion in total equity, which makes it 50% larger the next biggest mREIT, American Capital Agency. That scale has allowed Annaly to quickly establish a platform for making commercial loans. In fact, on its own, Annaly's commercial business would be the 10th largest mREIT. Ultimately, there is potentially more risk here, but it's turning Annaly into a business that's more difficult to replicate and, I think, a more compelling long-term investment.