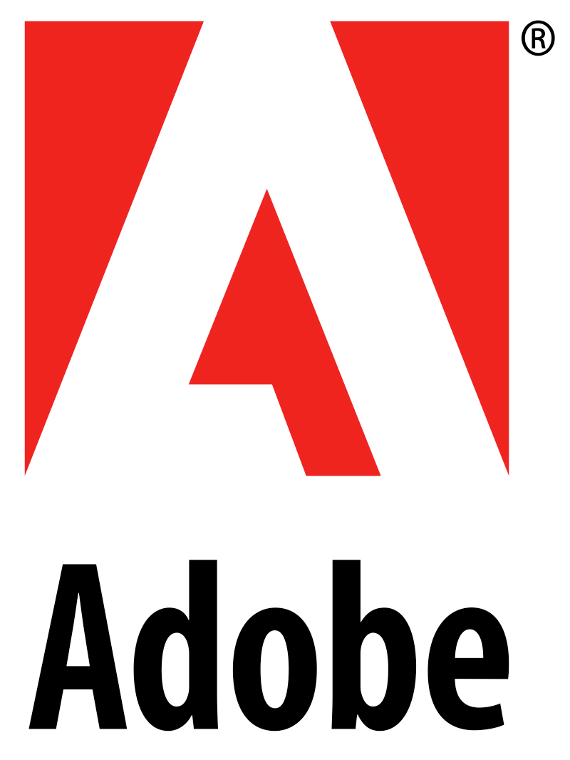 Adobe Systems (NASDAQ:ADBE) has been stomping the market recently. The maker of software for content production and management has tripled the S&P 500's returns during the last five years. In the last six months alone, Adobe shares have gained 10% while the broader market traded sideways.

Is Adobe's momentum destined to keep rolling, or has the stock become expensive and risky lately? Let's find out.

Profit
There was a time when Adobe's bottom line was far from solid. Ten years ago, smartphones, and then tablets, were undermining Adobe's core business. In particular, head-to-head rival Apple (NASDAQ:AAPL) insisted on shipping iPhones and iPads with Cupertino's own solutions for graphics and video editing pre-installed.

Adobe's future was hanging by a thread. Sales stalled, while earnings and cash flows plunged.

In recent years, Adobe moved away from its old licensing scheme, where you buy Photoshop or Premiere once, and use it forever. The new solution is a pay-as-you-go subscription scheme. Under the banners of Creative Cloud and Marketing Cloud products, these renewable revenues have provided an adrenaline kick for Adobe's overall financial platform.

Sales are now more predictable than ever, often being tied to multi-year license subscriptions. And customers seem ready to embrace the lower up-front software costs, even if it is in return for a larger long-term expense. In just two years, Adobe's operating margins have shot up from 11% to 19%. The return on capital employed has more than doubled, to 10.3%.

In short, Adobe's legs of financial clay have solidified. The company has never looked more stable, despite the continued rise of mobile computing. Adobe embraced that sea change instead of fighting it to the bitter end, which turned out to be the right choice.

Growth
Sticking with the subscription-based makeover, the same move worked wonders for Adobe's growth prospects. The company's top-line sales and bottom-line earnings trends can stand shoulder to shoulder with far-larger rivals such as Apple and Microsoft (NASDAQ:MSFT): 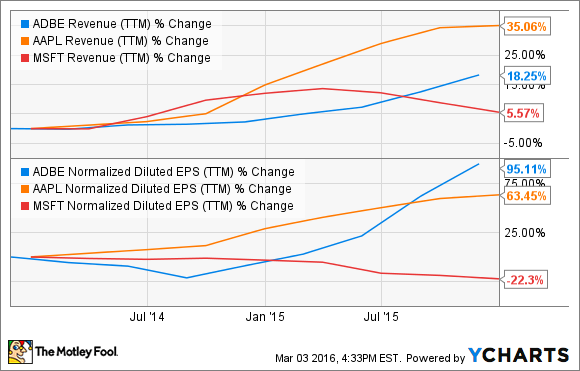 Keep in mind that Apple is the gold standard against which all large-cap growth stories in technology should be measured. As for Microsoft, that aging titan has come into a second wind of its own under the inspired leadership of CEO Satya Nadella. But even so, Adobe's software subscriptions can compare to Microsoft's or Apple's trends, and the media specialist is trouncing both of their bottom-line growth moves.

Valuation
This will be the scary bit for many Adobe investors. Adobe's earnings may be soaring, but so is the share price. The trailing P/E ratio has backed down from more than 120 a year ago to 71 today, but that's still far above Adobe's long-term valuation floor. Price-to-sales ratios have nearly tripled in five years.

Whichever way you slice it, these ratios also stand far above those seen in Apple or Microsoft stock. The market makers are treating Adobe like a high-flying growth stock, with valuations high up in the nosebleed seats.

Final verdict:
This is not a stock for penny-pinching value investors. Adobe's share prices are currently not based on what the company has done for us lately, but on the promise of even larger revenue and profit growth ahead.

Ironically, those phones and tablets that seemed to be killing Adobe a few years ago have now turned into a strength. The company provides software for every mobile platform that matters, and these devices also serve to expand the end market for digital content production. For many investors, these plusses outweigh the high share prices, making Adobe a reasonable pick for growth-stock investors.

This stock does not belong in every portfolio. It could belong in yours, if you can handle the volatility that comes with lofty valuations. Balance Adobe's large upside promise against an equally huge downside risk, buy in thirds, and pounce on temporary price drops -- if you dare.