The recent dividend reduction suggests that it’s a bit riskier than first thought.

Over the past year ConocoPhillips' (COP 0.75%) stock has nearly been cut in half, which is exactly what's happened to the price of oil: 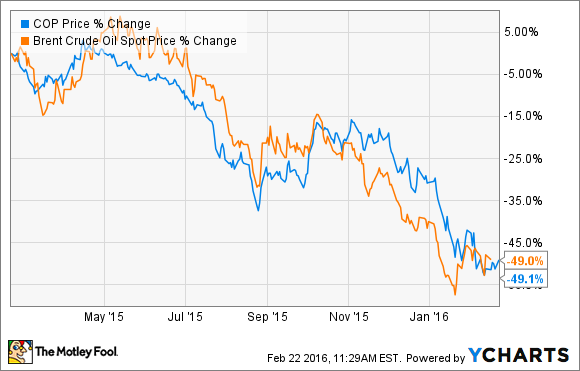 That's gut-wrenching volatility for most investors, especially the company's primary investor group, which are income seekers. In fact, that investor group has been burned twice by the company, not only being hurt by the significant slide in the stock price, but more recently by the company's decision to slash its dividend by two-thirds. As such, the company's risks have become very real to investors. However, when compared to many other oil stocks, the company actually is at the lower end of the risk spectrum. Here's why.

Its risk is correlated
ConocoPhillips' primary risk is its direct exposure to oil and gas prices. That's because when oil prices head south, it takes ConocoPhillips' cash flow with it: 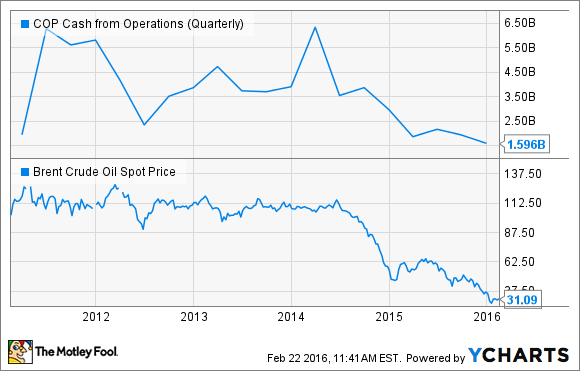 This leaves the company with less cash to invest in oil and gas projects and to pay out in dividends. Further, weaker cash flow has forced the company to borrow money to bridge the gap between cash flow and spending, impacting its debt metrics, which has the potential to limit the company's financial flexibility.

In other words, if oil continues to go lower, and stays there for a lot longer, it increases the company's financial risks. For example, it might need to borrow more money in order to maintain the status quo, or the company could be forced to make further cuts including eliminating its dividend.

Risk is really relative
Having said that, on a relative basis ConocoPhillips isn't as risky as some of its peers. For example, at the moment ConocoPhillips has a strong investment grade credit rating. That's a big competitive advantage when a growing number of peers are seeing their credit rating cut below investment grade. Anadarko Petroleum (APC), for example, had its credit rating recently cut to below investment grade due to its "high debt levels relative to cash flow" and the "expectation of some production declines caused by reduced capital investment." That downgrade is a big blow to Anadarko Petroleum, because its credit is now seen as junk, suggesting that it faces major uncertainties due to its exposure to very weak industry conditions. ConocoPhillips' credit rating, on the other hand, implies that it has a solid ability to meet its financial commitments despite current conditions, which suggests it has minimal bankruptcy risk.

Having said that, ConocoPhillips doesn't have the cash war chest of rival Occidental Petroleum (OXY 0.41%), which currently has more than $3 billion in cash on its balance sheet: 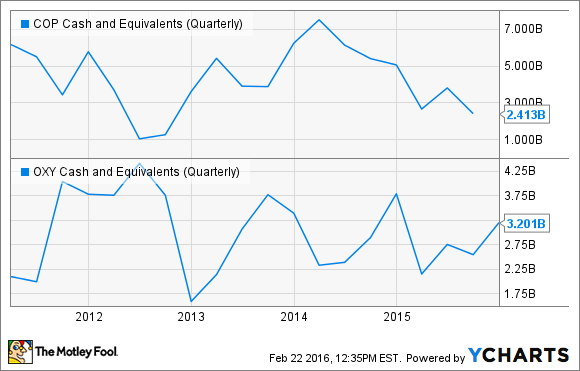 For perspective, that's enough cash to fully fund Occidental's 2016 capex budget, which will actually grow its production 2% to 4% over last year's rate. In addition, Occidental Petroleum has another $1.2 billion in cash coming in the door from a lawsuit settlement and a non-core asset sale, which will further bolster its cash position making it a lower-risk oil stock. Now, compare this to ConocoPhillips, which needs to spend $6.4 billion in 2016 just to keep its production flat and yet only has $2.4 billion in cash on its balance sheet. So, if commodity prices dropped significantly, taking ConocoPhillips' cash flow with it, its cash position wouldn't be able to carry the company as far as Occidental Petroleum's war chest would.

Investor takeaway
ConocoPhillips' inherent riskiness is really relative. Because of its exposure to oil and gas prices, it's riskier than a company that has no exposure. That said, compared to its peers it's less risky than a company like Anadarko Petroleum, but in some ways a bit riskier than Occidental Petroleum. Because of this, I'd probably characterize it as a medium risk stock. It's not the crème of the crop in the oil patch, but it's nowhere near the bottom either.