Don't judge a book by its cover, nor a hat by its glitzy brim. The Linux vendor is actually a safe value play in disguise.

Many investors dismiss Red Hat (RHT) at a glance. The stock trades at sky-high valuation ratios, and it's not always obvious exactly why Red Hat deserves such lofty pricing.

But the high share price conceals a robust business model, with some unique built-in defenses against common business headaches. With these points in mind, you may find Red Hat shares less risky than expected.

Valuation
There's a large elephant in the room. Let's give it a little push.

Today, Red Hat stock can be bought for 66 times the company's trailing earnings -- this is nosebleed territory. To many value-conscious investors, it's not just a strike against the stock but a single-shot dealbreaker.

In fact, that number is more than three times the trailing price-to-earnings of sector rival Oracle and about twice as expensive as Microsoft.

Lofty valuations are often supported by strong earnings growth, but Red Hat's trailing earnings actually fell 2.3%. A sky-high valuation and essentially flat earnings? I think we have lost all of the hardcore value investors by now.

Mitigating factors
However, this company is not being run to generate maximum profits yet. It's all about revenue growth -- and the underlying leadership in real-world target markets that go with it. Red Hat is certainly profitable enough to keep the lights on while building the platform for a much larger revenue base a few years down the road.

This approach is very similar to those taken by some of the greatest growth stocks of our time. It's also a familiar echo of how Apple rose in the early 2000s, on the back of torrential iPod revenue but only modest cash flows and earnings: 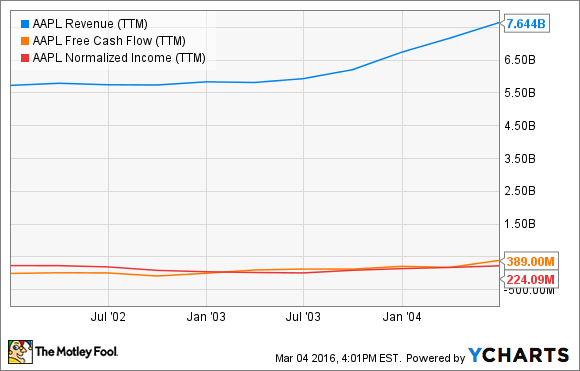 I'm not saying that Red Hat is sure to grow its market cap 50-fold over the next 10 years, like Apple did. Rather, this general strategy follows a historically robust model, and nothing is stopping Red Hat from attempting to follow in those gargantuan footsteps.

So earnings are low for a reason, as Red Hat simply focuses on a different line item on the income statement. Earnings may come later, and the price-to-earnings ratio seems less relevant in that light.

You may have noticed that many companies complain about the rising dollar these days. For example, mighty Microsoft's recently reported second quarter sales fell year-over-year as reported but would have increased in constant currency. Furthermore, currency effects also compressed profit margins. The strong dollar ended up reducing Microsoft earnings growth by more than 50%.

But not Red Hat.

Yes, the enterprise software vendor generates 41% of its business abroad. Yes, top line sales encountered the same 6% currency slowdown as the rest of the industry, but Red Hat supports those international sales with international operations in a way most of its peers can't match.

As a result, revenue rising from a soft dollar will also be undermined by rising operating expenses on a dollar-translated basis. And when the dollar runs up, lower recorded revenue is balanced by lower operating expenses. The effect on the bottom line is practically nil.

There's more, of course. As a provider of low-cost but high-quality solutions, Red Hat can attract new business during a downturn. The lean R&D model includes a large amount of open-source development with global communities, which is a tremendously valuable asset. And the list goes on.

Red Hat may look like a shaky investment, perched on a nosebleed valuation that surely cannot last. But looks can be deceiving, and this is actually one of the stocks I would grab first in the next market storm.