Running hard for a week can leave anyone taking a step back to breathe. A drop in oil prices seems to have precipitated that with Seadrill and several of its offshore drilling peers.

The smooth sailing in recent days was nice, but there are still rough seas ahead. Image source: Seadrill.

What: Shares of offshore driller Seadrill Ltd. (SDRL) are down 15% at 1:45 p.m. ET on March 8, joining a handful of its offshore peers that are seeing their stocks fall sharply today. Shares of Noble Corporation Ordinary Shares (UK) (NEBLQ), ENSCO PLC (VAL), and Atwood Oceanics, (ATW) are down 11%, 9%, and 5%, respectively, so far in today's trading.

So what: Considering the crazy run that offshore drilling stocks have had over the past week or so, it was only a matter of time before a day like today happened. Before this decline, all of these companies' stocks were up huge since March 1: 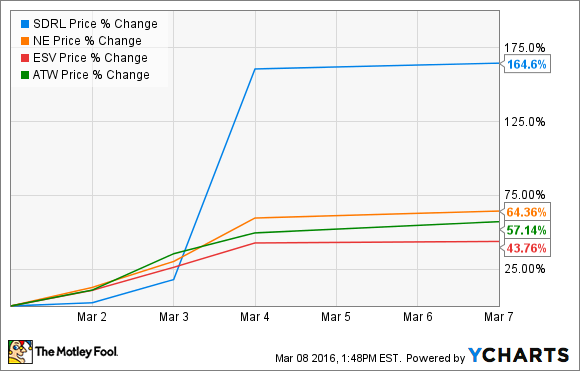 There are a handful of things driving these stocks up, including:

It's worth pointing out the latter reason in detail, as short interest has sharply increased in the sector over the past year or so: 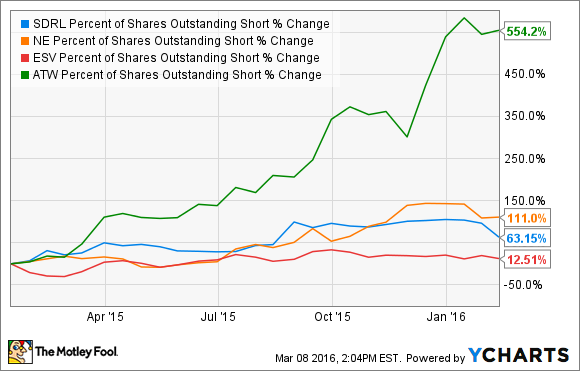 But it's seeming that today's 3% drop in oil prices was like rain on the bullish parade of the past week.

Now what: As nice as this run-up has been, the fact is that the offshore situation is basically unchanged over the past week. The stock movement we have seen is a product of trader speculation and short-sellers exiting their positions -- there is nothing fundamentally improving for the prospects of the industry.

Yes, it's potentially good news that Fredriksen has raised substantial cash that he could use to help prop up Seadrill as the downturn continues, but the outlook for offshore work remains dire. There is very little new work to be had, and that's not changing at all, even with oil prices up in recent weeks. Frankly, oil prices probably need to double from here before oil producers will be willing to consider investing in offshore development.

Bottom line: There's nothing that's material happening. The market is going to stay volatile for months to come. The increase in oil prices in recent weeks before today's drop is good, but it's only a fraction of the increases that the market needs, before investment in offshore production comes back to life.