Vivint Solar has terminated its acquisition agreement, and that's music to the ears of SunEdison Inc. today.

SunEdison Inc.'s (SUNEQ) nightmare pursuit of Vivint Solar (VSLR) is finally over. Since the company announced the original $2.2 billion acquisition of the country's second largest residential solar installer, its stock has fallen nearly 95% and there are now genuine concerns about it could soon become insolvent.

Dropping the Vivint Solar acquisition doesn't solve all of SunEdison's problems, but it will give the company more leeway to build a turnaround plan and that's great news for investors today. 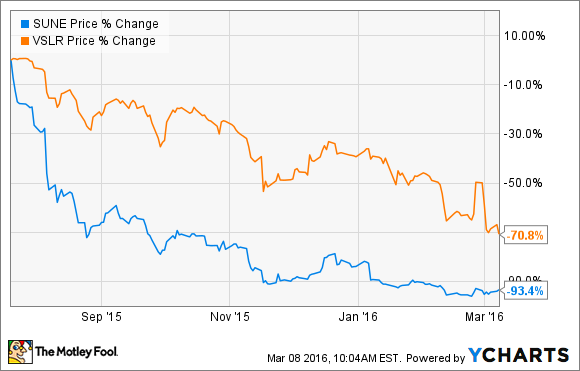 It's finally over
Early Tuesday morning, Vivint Solar said that it had terminated its merger agreement with SunEdison for a "failure to meet its obligations under the merger agreement." This means that the merger deal is dead, and also that Vivint Solar will "seek all legal remedies available to it in respect of such willful breach."

In other words, SunEdison doesn't have to come up with hundreds of millions of dollars to complete the acquisition, but it may have a court battle ahead if Vivint Solar seeks compensation. What exactly that compensation may be is not yet known.

The immediate, and related, good news is that David Tepper's lawsuit trying to block TerraForm Power's (TERP) acquisition of $799 million in residential solar assets is likely a moot point. He could still force changes at the board of directors level, but SunEdison doesn't need the funding from TerraForm Power to complete the acquisition, so the battle between Tepper and SunEdison takes on less meaning. This will lead to a lot less pressure on SunEdison's balance sheet in the next few months.

Will this be enough to save SunEdison?
Not having to fund the Vivint Solar acquisition will ease SunEdison's short-term balance sheet pressure. But it doesn't fundamentally change the company's business challenges.

SunEdison is trying to transition into a build-and-sell development strategy, and there's not much evidence yet that it's working. You can see below that the operating cash flow and net income trends for SunEdison aren't exactly heading in a positive direction. 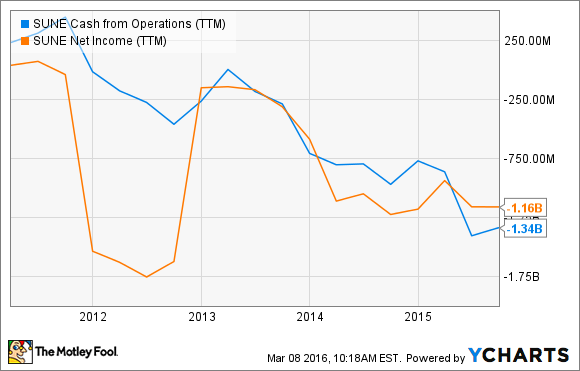 In the next few months, SunEdison may be at a lower risk of default. But this may just lead to a slower death if SunEdison can't become a world-class project developer and generate solid margins on sales to third parties. It's progress on the operational front that SunEdison really needs to show investors.

Where does Vivint Solar go from here?
There are also a lot of questions now surrounding Vivint Solar. The company was the second biggest residential solar installer in the country, but growth is slowing and investors are starting to question how much value residential solar companies are really generating.

Complicating matters is Vivint Solar's traditional reliance on leases or power purchase agreements, not system sales to homeowners. Customers are increasingly turning to cash purchases or loans to finance solar systems and Vivint Solar will need to move that direction without the backing of a larger company. It's dipped its toes in the water with a Mosaic loan offering, but a partnership with another solar company or financier could give Vivint Solar more long-term credibility.

With this debacle behind them, we'll see if both SunEdison and Vivint Solar can now build sustainable renewable energy businesses on their own. That may be easier said than done.