What: 2015 was a terrible year for Spirit Airlines (SAVE 2.90%) investors. Spirit shares lost up to 60% of their value during the year, after price-matching activity from legacy carriers like American Airlines (AAL 7.09%) caused unit revenue to plummet.

However, the stock has found firmer ground this year, as a CEO change has increased investors' confidence in the company's trajectory. In fact, Spirit Airlines stock jumped 14% during February, according to data provided by S&P Global Market Intelligence. 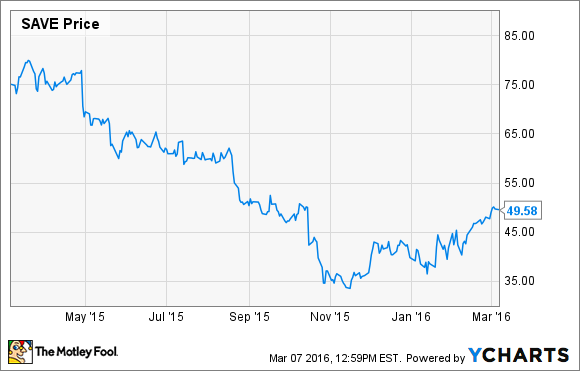 So what: Former CEO Ben Baldanza presided over a period of huge revenue and profit growth for Spirit Airlines. Even in 2015, as the stock plunged, Spirit Airlines managed to grow adjusted earnings per share by 35% year over year, due to the benefit of lower fuel prices.

Nevertheless, many investors were frustrated by the company's weak unit revenue and multiple guidance cuts last year. Baldanza's strategic preference to focus on the biggest markets and gain customers by underpricing legacy carriers like American Airlines began to seem less prudent once those competitors started to embrace price-matching strategies.

By contrast, on Spirit Airlines' conference call last month, new CEO Bob Fornaro told investors that he would likely put more emphasis on underserved small and mid-size markets. In other words, he thinks Spirit can thrive by flying routes that rivals like American Airlines and Delta Air Lines don't serve on a nonstop basis.

Fornaro also pledged to improve Spirit's operational reliability, which has lagged the industry in recent years. For example, better on-time performance could lead to more travelers considering Spirit for their travel plans. Some initiatives like scaling back aircraft utilization could increase Spirit's unit costs, but there would be offsetting cost benefits from operating more reliably.

Now what: Bob Fornaro has laid out a plausible plan for how Spirit can maintain the core of its business model while making some tweaks to respond to stepped-up competition from legacy carriers. However, that's no guarantee of success in the fast-moving airline industry.