Please ensure Javascript is enabled for purposes of website accessibility
Log In Help Join The Motley Fool
Free Article Join Over 1 Million Premium Members And Get More In-Depth Stock Guidance and Research
By Ashraf Eassa – Mar 9, 2016 at 11:15AM

For quite some time, it has been speculated in the press that Apple (AAPL -2.21%) is working on its own wireless/communications chips. This is interesting because Apple building its own, say, Wi-Fi or cellular chips, would mean losses for major wireless chipmakers like Broadcom (AVGO -1.55%) and Qualcomm (QCOM -2.09%).

Although the specifics of what Apple is working on are not yet clear, a job listing on Apple's website makes it plain that the company is working on an in-house wireless chip (or, more likely, "chips").

The listing in question
The following is from a job listing on Apple's site looking for a Wireless Hardware Design Engineer: 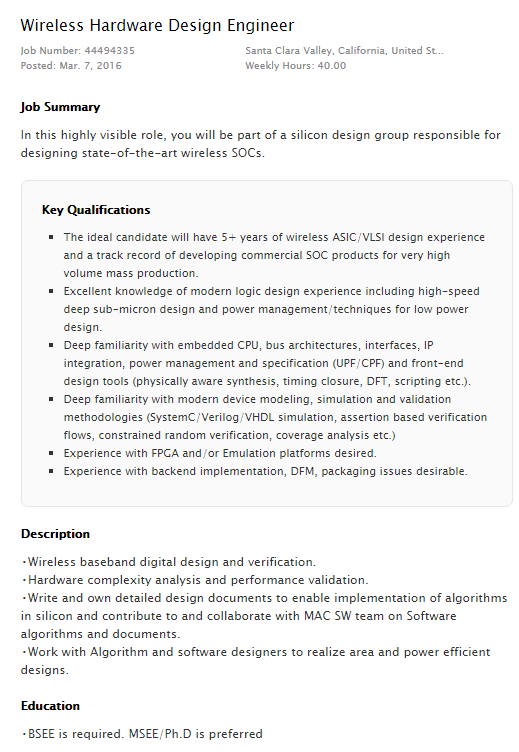 The listing clearly indicates that the candidate would be part of a chip team "responsible for designing state-of-the-art wireless [system-on-chip]" products. Additionally, the position seems to want somebody who has experience building entire system-on-chip products, which seems to suggest that the team may be working on future iterations of its A-series chips aimed at the iPhone. That being said, even a stand-alone cellular modem in a smartphone is technically a "system-on-chip."

When will we see the fruits of Apple's labor?
It's not clear when we will begin to see the first Apple-designed wireless chips. Given that Apple Wi-Fi chip supplier Broadcom seems upbeat about its mobile Wi-Fi chip business (CEO Hock Tan referred to it as a "sustainable franchise" on the company's most recent earnings call), and given that Apple chip chief Johny Srouji said in an interview with Bloomberg Business last month that he "[doesn't] want to go into Wi-Fi specifically," I doubt that Apple is doing its own Wi-Fi chip.

That should come as good news to Broadcom investors, as a significant portion of its mobile Wi-Fi chip sales are to Apple in support of the iPhone.

However, what I think Apple is likely working on is its own cellular modem solution. Many of its competitors, such as Qualcomm, Samsung (NASDAQOTH: SSNLF), and Huawei build chips with integrated modems. Given that Apple is easily the most profitable (and powerful) of all of these names, it wouldn't be the least bit surprising to see Apple build its own modems and integrate them into its A-series chips.

As far as timing goes, this is unclear. If Apple were planning to build such a product with its upcoming A10 chip, then Qualcomm would be poised to supply nothing into upcoming iPhones.

In a similar vein to the argument that Bernstein Research analyst Stacy Rasgon made with respect to Qualcomm potentially losing a portion of the iPhone 7 modem business to Intel (INTC -1.88%): if the wireless chip giant were expecting such a big loss in the near-term it would probably have an adverse impact on the margins of its chip business -- a sharp contrast to the upbeat margin guidance Qualcomm has given.

That said, I wouldn't be surprised if such a development were to happen over the next three years or so. This is certainly a risk that Qualcomm investors should keep a close eye on.