Deere & Company's (NYSE:DE) second-quarter earnings were a mixed bag. The company is executing well, but difficult end markets led to a full-year guidance reduction. Let's review the pressures building up on Deere and what management said on the earnings call to help alleviate investors' fears about 2016.

The bear case for Deere
Investor concerns include:

I will deal with these points in turn.

End markets
There is little management can do about weak end markets, and a further deterioration in conditions caused a lowering of full-year net sales growth estimates to negative 10%, compared with a previous estimate of negative 8%. Similarly, guidance for full-year net income was taken down to $1.3 billion from $1.4 billion previously.

On a brighter note, Josh Jepsen, manager of investor communications, reminded investors that grain stocks-to-use levels were still sensitive and that "unfavorable growing conditions in any key region of the world, as well as unknown impacts from any geopolitical tensions, could result in prices quickly moving higher." A lower stocks-to-use ratio is generally more bullish for prices. 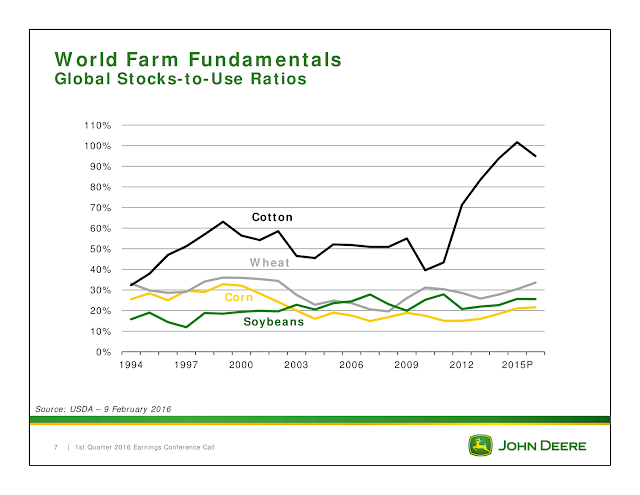 Inventory build
Based on looking at inventory over next quarter's sales, Deere's inventory position is building up. It's something you might expect in a deteriorating sales environment. Is it a sign of pricing pressure to come?

It's a particular concern, because Caterpillar's (NYSE:CAT) VP of finance services, Michael DeWalt, talked of pricing pressures caused by the stronger U.S. dollar, while CEO Doug Oberhelman referred to "excess capacity with competitors" in its construction- and energy-heavy markets. 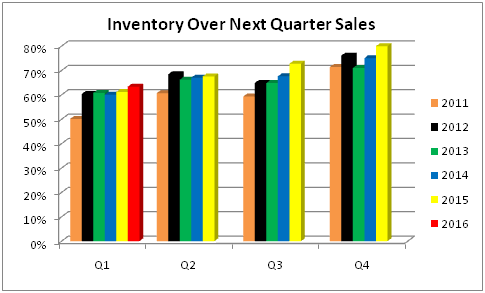 However, Deere maintained its forecast for 2% price realization in 2016, and Director of Investor Relations Tony Huegel argued that "with our current forecast, we would finish both inventory and within our factories as well as dealer inventories at or below, as a percent of sales, where we were at the end of 2015."

That said, Huegel defined the price environment as "very challenging" and referred to a large competitor in construction -- possibly Caterpillar -- that had talked of "negative pricing" for its business.

Leased equipment and used machinery prices
As equipment sales have declined, Deere has dramatically increased the amount of equipment it leases: 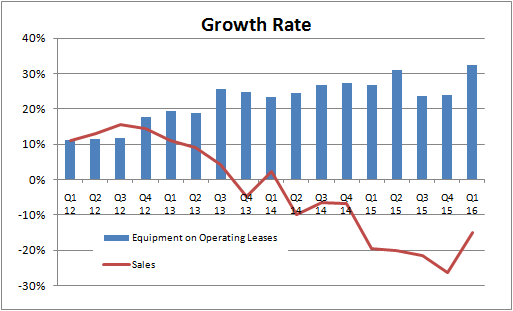 Huegel answered a related question by pointing out that only 5% of the ag lease portfolio was on "12 months or less, where you've got 22% of production-class equipment leases." Moreover, Huegel said, 42% of the ag portfolio is used equipment, compared with just 3% in construction.

Huegel concluded that there was "still a risk that we can maintain those used equipment prices, but at this point that is holding up well."

Reliance on finance arm
Deere lowered full-year guidance for net income from its finance arm to $525 million from $550 million previously, having reported a decline in the first quarter of $28 million to $129 million. Management blamed a combination of currency effects, less favorable financing spreads, higher provision for credit losses, and "higher losses on residual values primarily for construction equipment operating leases," as Jepsen said. In other words, all the things that investors have cause to be concerned about with Deere's finance operations.

If there is a positive, it's that the company's core ag operations haven't been hit with significant losses on residual values, yet.

Huegel argued that Deere's forecast for full-year provision for credit losses/average owned portfolio of 0.19 is still a "very attractive level," and it's a lot lower than in previous years. However, given that guidance is for financial services to contribute 40% of net income this year, any significant overshoot in credit loss provisions will have an effect.

The takeaway
The color on the amount of used equipment in ag leasing operations is useful, and Deere's ability, thus far, to keep increasing prices is very impressive. There's little doubt that it's a well-run company, but the concerns over its reliance on its finance arm and the inventory buildup remain. Moreover, given that the company reduced its macroeconomic outlook, it's hard to see these results as a net positive.

All told, it's hard to see conditions improving unless crop prices do, but until then the downward pressure on earnings will remain. All told, I think the stock contains enough specific risk to make it worth avoiding in favor of simply buying a corn or wheat ETF as a way to play higher crop prices.