Messaging king WhatsApp and its 900 million monthly active users (MAUs) gets lots of press, particularly since Facebook (NASDAQ:FB) CEO Mark Zuckerberg has been asked monetization questions for the past year. Zuckerberg said Facebook would look at monetizing WhatsApp once it hit 1 billion MAUs -- a milestone that may have already been reached given the apps rapid growth.

But WhatsApp isn't the only messaging asset at Facebook's disposal. A year ago at its annual F8 conference Zuckerberg mentioned his plans for Facebook's "other" chat app, Messenger, included developing it into a platform unto itself. The ramifications of that statement may have flown under the radar, but it translates to building Messenger into a full-blown social media site from its expanded, but still primarily messaging, format.

Heading into 2016's F8 conference next month, rumors are swirling that Facebook is prepared to take a giant leap forward with its platform plans for Messenger, which could be the first step to monetization. 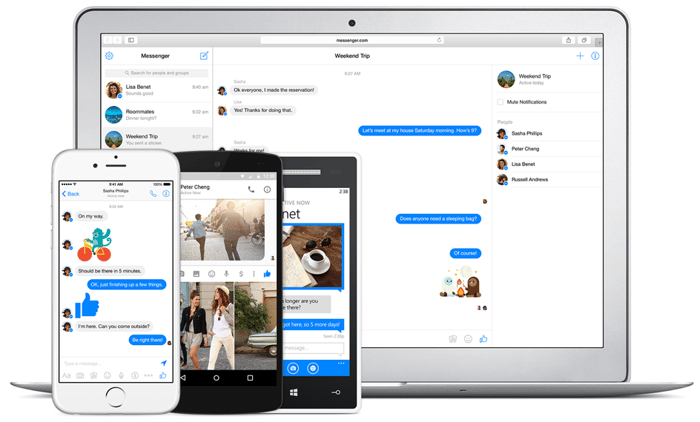 Messenger boasted an impressive 600 million MAUs in March 2015. Today, Messenger is 800 million plus MAUs strong, and still growing. Messenger's 200 million MAU increase, give or take, last year made it the fastest growing app on the planet. For iOS users, the only app more popular than Messenger was Facebook itself.

The foundation has been laid, and investors may only have another month before Messenger ups the ante on folks like Twitter (NYSE:TWTR) and the host of relatively smallish, messaging alternatives. Word has it Facebook will bring along a few publishers to its F8 conference in April to give a demonstration of how easy it is to automatically load content onto Messenger.

The addition of content is a clear indication of Facebook's desire to make it a destination site, not just a messaging tool, much like Facebook itself. Opening the content doors to publishers is in addition to several baby steps -- by comparison -- Facebook has already taken to expand the scope, and usage, of Messenger. And that could prove to be bad news for Twitter, in particular.

Some pundits argue that comparing Facebook to Twitter is akin to apples and oranges, and to some extent they're right. But Facebook's plans for Messenger would put it directly in Twitter's sandbox, and despite Twitter's recent stock price bump, more competition from a Facebook-owned property will send investors running for the hills.

More than messaging
Like Facebook and Twitter, Messenger's photo-sharing capabilities are a hit with over 10 billion sent monthly. Video calling, electronic payments, Messenger for businesses, and its artificial intelligence (AI) assistant M, among other features, are already incorporated into Messenger. With the addition of content, Facebook's objective of developing it into a distinct platform is well on its way. With the stage nearly set, can the monetization of Messenger be far behind?

Facebook is notorious for testing, and retesting, new features or changes, including implementing a monetization strategy. Recent examples of Facebook's slow but steady approach to change include incorporating video spots into its cache of advertising alternatives, (finally) taking the ad training wheels off Instagram, and the release to the masses of its Oculus Rift VR headset Rift early this year.

So, generating revenue from Messenger won't happen next week, or next month, but as a separate platform, the groundwork for testing shouldn't be far off. As a destination site, users will become accustomed to a more Facebook or Twitter-like experience: a place to not only communicate with friends, but stay abreast of what's happening in the world.

Messenger as a revenue producing, stand-alone platform will allow Facebook to do what it does best: utilize its in-house technology for amassing and analyzing user data to target the right ad, at the right time. Facebook's three million advertising partners appreciate its ad targeting capabilities -- higher conversion rates are a marketers dream -- as do MAUs because there's no need to inundate users with ads to boost sales.

Next month may prove to be the start of a new and improved Messenger, both for users and Facebook investors hungry for yet another revenue source.