The TV guide specialist may have found a way to stay relevant in an ever-changing media market. Does that make Rovi a good investment? 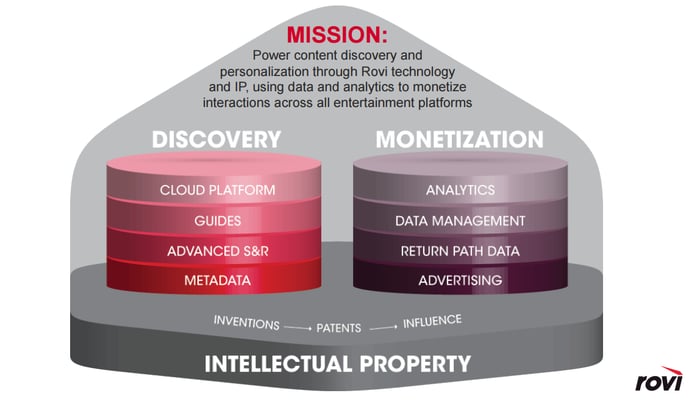 What: Shares of Rovi Corporation (NASDAQ: ROVI) gained 17.1% in February 2015, according to data from S&P Capital IQ. The developer of data and information tools for the entertainment industry delivered a fantastic fourth-quarter report in the second week, and that made all the difference.

So what: In the fourth quarter, Rovi's sales increased 11% year over year thanks to renewed technology license deals with Sony (SONY 0.10%) and AT&T (T -0.93%). Back in December, when these agreements were announced, Rovi shares rose more than 50% over the next three days. The earnings report simply outlined the financial impact of the Sony and AT&T deals, and shares jumped another 18% on the news.

All told, Rovi stock has more than doubled since unveiling these important license extensions.

Now what: Rovi's TV listings patents are at the core of the agreements with Ma Bell and Sony. It is more cost-effective for these industry titans to lean on Rovi's pre-baked solutions rather than rolling their own, and the license costs are but drops in the ocean. Sony can make these payments out of a $6 billion annual pile of free cash flows, and AT&T's cash profits are even larger.

But for Rovi, whose annual sales barely break the half-billion mark, these are game-changing deals. The company hopes to sign more of these life-giving license deals in the coming year.

Mind you, Rovi hasn't exactly built investor wealth in the long run. These recent gains came from a deep, dark stretch of multi-year lows. Even now, Rovi shares stand 7% short of their year-ago prices. The stock could double again and still not make up for its terrible five-year losses.

The company may have found a path toward financial stability, and even some short-term growth if the pending license negotiations work out as planned. I'm still not sure that I see a long-term place for Rovi shares, though. Those crucial license agreements are risky and the next one could always fall through. At best, this is a relatively stable value play with a heaping side of additional risk -- and Rovi doesn't pay a dividend that could make this option worthwhile.

I'm staying away. It's too easy to find superior investments without even leaving Rovi's chosen market.

3 Dividend-Paying Stocks to Buy in October
411%