Please ensure Javascript is enabled for purposes of website accessibility
Log In Help Join The Motley Fool
Free Article Join Over 1 Million Premium Members And Get More In-Depth Stock Guidance and Research
By Demitri Kalogeropoulos - Mar 10, 2016 at 8:00AM

The grocer is targeting a record year of capital investments ahead.

The supermarket chain produced $2 billion of profit from its $110 billion of sales last year. That equates to $2.06 per share, 20% above the prior year's result and double the long-term growth pace that Kroger aims for (8% to 11% higher annual profits).

Executives are planning to extend that positive momentum by boosting their investments in the business: Capital spending is projected to come in at $4.2 billion, up 27% from the $3.3 billion Kroger spent last year.

New stores
Rival Costco (COST -1.40%) has a much smaller footprint (less than 500 locations in the U.S.), but is boosting its capital spending at a similar pace to Kroger. A large portion of that spending will be dedicated to increasing the store footprint. Kroger operates 2,800 locations but still sees plenty of room to expand -- either in new markets or in underserved areas of established markets.

The membership club plans to open as many as 32 new warehouses in fiscal 2016 (requiring about $3 billion of cash) for its most aggressive growth year yet. For both of these retailers, their biggest growth opportunity involves selecting high-quality locations for the development of new stores.

They've launched "order online, pick up at the store" options in a few markets and will expand that availability this year. In addition, the company will invest to improve its mobile app and online presence in 2016. "We are creating a seamless experience for our customers," McMullen said in a recent conference call.

But it's the Simple Truth franchise that should see the most attention since it is responsible for helping Kroger steal market share from organic and natural food rivals like Whole Foods Market (WFM).

That brand broke $1.5 billion of annual sales last year, up from $1.2 billion in 2014. Kroger says over 20 million households have purchased at least one of its thousands of products sold under the Simple Truth brand. Meanwhile, Kroger's lower cost structure has helped it slash prices to the point that it nudged Whole Foods into trying a new approach to selling organic and natural food that aims to compete for value-conscious shoppers. Don't expect Kroger to stand still, though; it plans to expand the Simple Truth brand into new categories like household, personal care, and baby products this year.

What's left for shareholders?
The good news for shareholders is that their returns should still climb even though capital expenditures are rising at a faster pace than sales this year. Kroger expects to earn $2.25 per share in 2016, for a 9% boost over last year's haul.

Investors can thank strong cash flow trends for that happy result. Kroger produced $4.8 billion of cash last year, up from $4.2 billion in 2014. The grocer even recently broke away from Costco on that important metric. 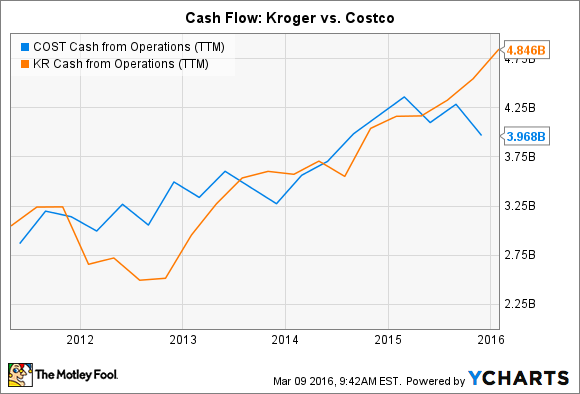 That stellar level of cash generation means that Kroger should have no problem funding higher capital spending without compromising cash returns through dividends and stock buybacks -- all while maintaining a double-digit profit boost in 2016.