How much does it matter that investors in the leading home-improvement retailer are getting another double-digit dividend increase this year?

What happened?
Home Depot (HD) announced when it released its fourth-quarter and full-year 2015 earnings in late February that it was raising its quarterly dividend by 17% to $0.69 per share in 2016. The dividend is payable on March 24 to shareholders of record at the close of the market on March 10. The leading home retailer's stock is currently yielding 2.2%, considerably outpacing rival Lowe's (LOW) 1.6% yield.

This marks the seventh consecutive year that Home Depot has raised its dividend, as well as the 116th consecutive quarter it's paid a cash dividend. This year's 17% hike follows 21% and 26% increases in 2013 and 2014, respectively. 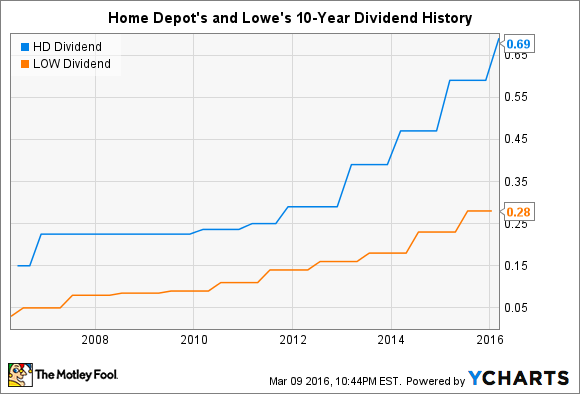 Home Depot's been able to generously raise its dividend in recent years due to its continued strong financial performance during the long-lived U.S. housing market recovery. The company targets a dividend payout ratio of approximately 50% of earnings, whereas Lowe's targets a 35% payout ratio. This factor -- along with Lowe's less impressive earnings performance -- has resulted in a widening spread between the two companies' dividends.

And the handy-dandy impact meters lands on... 4 of 5, quite significant.

Does it matter?
It matters significantly that Home Depot is raising its dividend this year and has generously been doing so in recent years. This fact makes the company's stock more attractive than it would otherwise be and more tempting than Lowe's stock. This is obviously true for investors who rely on Home Depot's dividends for income, but also for those who reinvest their dividends because the power of compounding is phenomenal over longer terms.

This chart shows Home Depot's and Lowe's 10-year stock-price increases and their total returns, which include dividends reinvested. 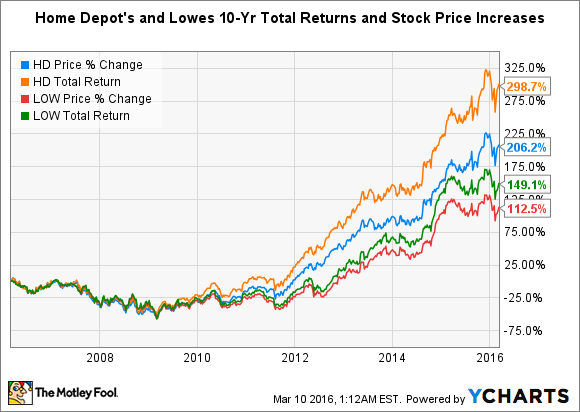 There are two items of significance in the chart. First, thanks to the power of compounding, Home Depot's 299% total return is considerably better than its stock-price increase of 206% -- and the percentage spread between the two will widen over time if the company maintains its current dividend policy.