It's almost inevitable Seadrill's shares would fall after the sharp run-up to start March, without any "real" news to support the jump.

Offshore drilling could remain in a downturn for much longer. Image source: Atwood Oceanics.

What: Shares of offshore driller Seadrill Ltd. (SDRL) finished trading on March 10 down 9.9%. That's three straight days of nearly double-digit drops for the company, far and away worse than the stocks of offshore competitors Transocean LTD (RIG 4.90%), Atwood Oceanics (ATW), and Noble Corp. (NEBLQ) over the same period: 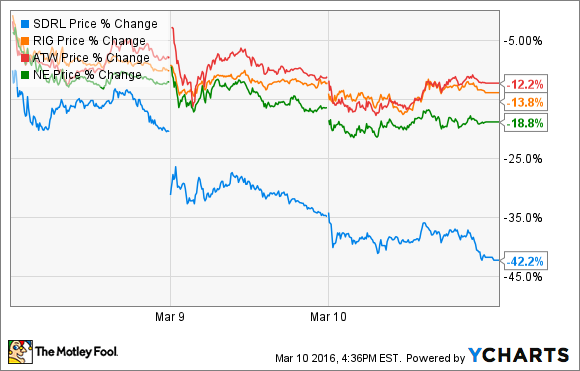 So what: Context is important here. Seadrill's stock may have underperformed the sector over the past few days, but if we go back to the beginning of March, the story changes: 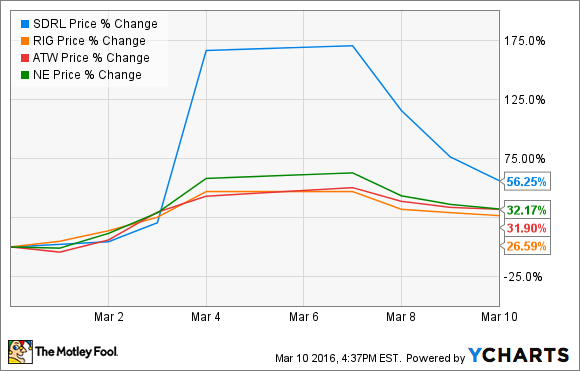 What a difference a week makes. The key difference here is that it was in early March when it was disclosed that Seadrill founder and largest shareholder John Fredriksen has offloaded another investment and freed up more than $500 million in capital, and that he could use that cash to help support the struggling driller if the offshore environment were to deteriorate even further.

That's the key news that drove Seadrill's shares up sharply a week ago, while Atwood Oceanics, Noble Corp, and Transocean are up, but far less.

Now what: Yes, most offshore drilling stocks are up since oil prices bottomed about a month ago: 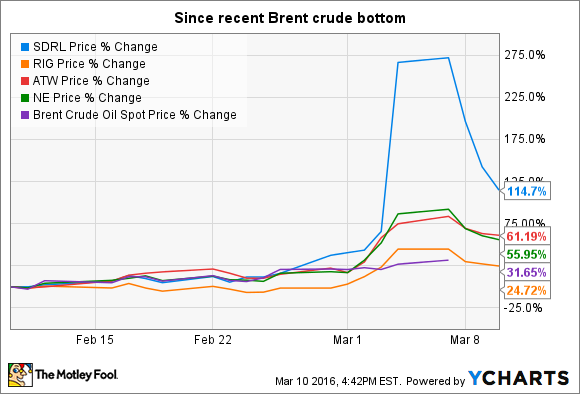 Don't get me wrong: It's nice seeing oil prices come up, and it's a good start. Furthermore, there are solid reasons to believe that this could be the first steps in the recovery that the entire sector has been hoping for over the past year-plus.

But until the recovery is fully and clearly under way, the offshore drilling sector won't get any better. Frankly, it could be the last segment of the oil industry to benefit from an oil price recovery.